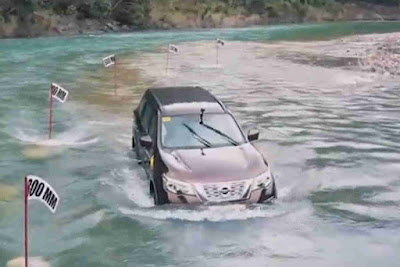 About a year after Top Gear Philippines reported that the Terra’s safe water wading depth was a lowly 450 mm, Nissan Philippines said f*ck it and decided to turn their mid-sized SUV into a submarine for an impressive video. The result? 800 mm of water wading! Truly go anywhere stuff.

It’s funny because Nissan Philippines now quotes the Terra’s Chief Engineer Hironori Awano as saying, “Floods during the monsoon season cause big challenges in major cities like Manila, because people can’t reach their destinations on time, with rising waters causing delays. Our customer’s safety and ability to go anywhere, at any time, is at the heart of what we do. This inspired us to ensure the Nissan Terra’s ability to go through high water can transform the way people drive, with confidence.”

But…ummmm…this is the same guy who showed a video of a Terra’s interior getting flooded at 700 mm. Though to be fair, Top Gear Philippines said it took about two minutes (we can’t confirm this since we weren’t there during the said presentation).

Anyhow, whether its 450 mm or 800 mm, there are still some interesting tidbits from Nissan’s report:
What’s the takeaway from all this? Well, it seems the Terra can cross through 800 mm of floods mechanically. Yes, it gives you the go anywhere confidence and all that…but the question is, will you? Are you willing to risk your P 1.7-million SUV to prove that you’ve got bigger balls than everyone else? Uh…perhaps it’s best to wait that flood out, right?