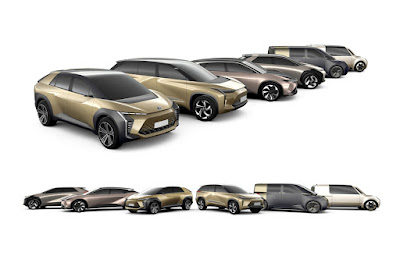 After shunning Battery Electric Vehicles or BEVs for quite some time for its Hybrid Electric Vehicle (HEV) technology, Toyota is now ready to join the electric bandwagon and they’re going to do it at a very brisk pace.

Using the lessons learned with its HEV technology found in vehicles such as the Prius, Toyota says they’re ready to create a highly efficient system which will increase overall cruising range and performance. In addition, they’ve been able to afford better durability compared to the competition.

While the first model to receive the all-electric Toyota is China with the recently unveiled C-HR / IZOA at Auto Shanghai, Toyota will also look at creating ultra-compact models specifically for the Japan market. They will also work to develop various types of BEVs depending on the market and will develop high-performance batteries as well.

In addition, understanding that there is a paradigm shift happening, Toyota will also shift its focus from merely manufacturing BEVs to searching openly for partners, especially in developing new models. One such announcement is an upcoming all-electric SUV developed jointly with Subaru and this will use a new platform designed specifically for collaborative planning: the e-TNGA.

This new platform is very flexible and can vary things like overhangs, wheelbase, and width. For its all-electric SUV with Subaru, the e-TNGA will have a twin-motor set-up and can vary its power distribution from front-, rear- and all-wheel drive.

Finally, Toyota will also engage in other “peripheral services” such as the re-purposing of used batteries to battery recycling in order to add value and “maximize the appeal” for battery electric vehicles.
at 11:07 PM