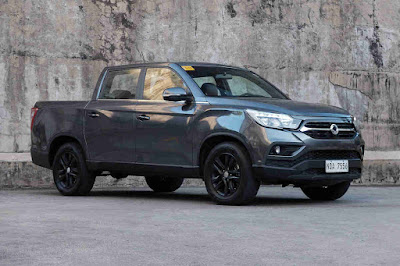 In the story of which came first: the SUV or the pick-up, the common answer would be: the pick-up. This is true for just about every offering in the market today except for one: the Musso. Leave it to a brand like SsangYong to think outside of the box and engineer a truck out of their mid-sized SUV. With that, it feels like an SUV trapped in a truck’s body; and for the typical Filipino pick-up buyer—the one that looks for refinement, ride comfort more than payload capacity and off-roading capability—this might as well be the right choice.

Almost immediately, the Musso visually communicates that it’s not doing any of that rough-and-tumble stuff. With just 215-mm of ground clearance and road-going 18-inch Hankook tires, it’s more at home on unpaved gravel roads than tough trails. And because it doesn’t have this tougher-than-thou pretense, it actually looks much more refined. The front-end is pleasantly modern while the side have these interesting lines that accentuate the fenders. Sadly, like most other SsangYong models, it turns weird at the back—some de-badging would be in order to clean things up.

With no step boards (the doors extend beyond the sill), it’s a hop to get into the Musso’s cabin. Once inside, the dashboard feels like a throwback to SUVs from five years ago. While the two-tone color scheme and Nappa leather seats (they’re vented to boot) do a lot to uplift the overall ambience, the buttons, particularly those used for climate control are the greatest letdown. For instance, it may have dual zones, but the buttons and display are so small, it’s best just to memorize where “Auto” is and leave it to its own device.

Ergonomically, the Musso is surprisingly good. Outward visibility is clear from all directions, and the amount of steering and seat adjustments are just right. It would have been perfect if not for the absence of parking sensors anywhere (it does have a rear camera though). To the back seats, they’re generous and wide with better back support, a comfortable pitch, and more knee room than anyone else. It also comes fitted with three adjustable headrests, a flip down center armrest with integrated cupholders, a flat rear floor, and vents located by the console too. It would have been perfect if not for the decision to install a two-point lap belt for the middle occupant.

Measuring just a tad longer than five meters (most others cross the 5.2-meter mark), the Musso is considerably friendlier to drive especially for city slickers. The heavily-boosted but direct steering gives a hint of agility that other pickup trucks lack, while the body control is actually quite acceptable even when being tossed through corners. Single-handedly though, the best part of the drive is the stellar NVH suppression. Without a doubt, no other truck in the market can rival this SsangYong. On smooth surfaces, backed up by the road-oriented five-link rear coil spring suspension, the chassis plays along making it the best riding pick-up truck on the market today. However, as the going gets rough, even minor ones, jitteriness starts to flood the interior fairly quickly.

Moving on, the Musso has pretty good straight-line grunt with 181 horsepower and 420 Nm of torque. Enthusiasts will note though that these figures come out from a smaller 2.2-liter motor and while anyone will be hard-pressed to call it underpowered, it’s almost solely reliant on boost to get things going. Thankfully, the forward surge is controllable while the Aisin-sourced 6-speed automatic is almost always willing to play, if not for some indecisiveness at top gear. Regardless, its 7.40 km/L figure in heavy traffic and 10.98 km/L in light traffic are good.

Despite all the goodness that the Musso brings into the pickup truck market, it’s hindered by one big thing: the price. At P 1,495,000 (an additional P 15,000 for the matte black rims), it’s going against some pretty stiff competition from both 4x2 (Ford Ranger Wildtrak, Isuzu D-MAX Boondock, Nissan Navara N-Warrior, Toyota Hilux Conquest) and 4x4 (Nissan Navara) rivals. While it’s dressed up to the nines, the smaller dealer network may not make SsangYong such a comfortable choice for everyone. And even for those who’ll opt to take the plunge, it doesn’t feel like the complete package with things like LED/HID headlights, four-wheel drive, cruise control, and stability control being some of the more glaring absences. Nonetheless, it does come with a standard 5-year / 100,000-kilometer warranty and free PMS for a 3-year / 60,000-kilometer period, so there’s that.

For all of its shortcomings though, the Musso still manages to stand out as a genuinely likeable pick-up truck. By opting to design it around a passenger SUV first, it scores high in design, handling, and refinement. It won’t win any tough truck contest anytime soon, but as long as the would-be buyer remains honest, this SsangYong pretty much ticks all the right marks.