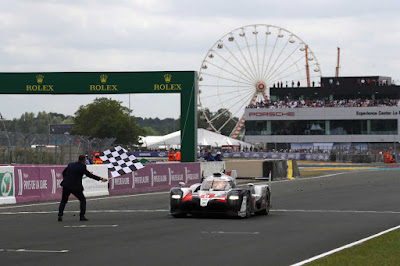 Toyota has become the first Japanese manufacturer to clinch two 24 Le Mans titles after the #8 Toyota Gazoo Racing TS050 Hybrid crossed the finish line first at the Circuit de la Sarthe ahead of its sister car. In the process, the trio of Sébastien Buemi, Kazuki Nakajima, and Fernando Alonso successfully defended their Le Mans crown.

On paper, the #8 car’s outright Le Mans win seemed straightforward. However, those facts don’t reflect the true drama during the closing stages that denied the #7 car piloted by Mike Conway, Kamui Kobayashi, and José María López of what seemed like certain victory.

On the 367th lap, with a lead of over two minutes, data on the #7 car indicated a puncture and José pitted to replace the tire. A sensor issue resulted in the wrong tire being identified, meaning José left the pits still with a deflating tire. That necessitated a slow lap back to the pits when all four tires were changed, handing an unassailable lead to Kazuki in the #8.

The #7 crew had controlled much of the contest, having set the fastest-ever Le Mans race lap of 3 minutes 17.297 seconds. Other motorsport records were rewritten too; Kazuki became the first circuit-racing World Champion from Japan and Fernando is the second driver to win four-wheel world titles in two different disciplines, having previously been crowned Formula 1 champion.

The #7 car had started the race from pole position following Kamui's fastest qualifying lap, with the #8 starting just behind. That set the scene for an exciting and close battle for overall victory between the two 1,000-horsepower TS050 Hybrids, with momentum swinging one way and then the other.

After 12 hours the two Toyotas were separated by only 8.6 seconds. In the night, the #7 seized a decisive advantage as the sister car faced an aerodynamic imbalance. That was caused by bodywork damage due to the rigors of a tough, flat-out contest although the cars were always on the same lap.

As the final hours approached, the gap remained relatively stable around two minutes and the focus switched to bringing the cars home safely. All appeared to be going to plan until the #7 experienced its dramas and Kazuki took the lead with less than an hour to go.

Right after Toyota took the win at the 87th 24 Hours of Le Mans, the Japanese carmaker turns its focus for the 2020/2021 World Endurance Championship. There, Toyota is expected to race its new GR Super Sports in the hypercar class.
at 10:12 AM