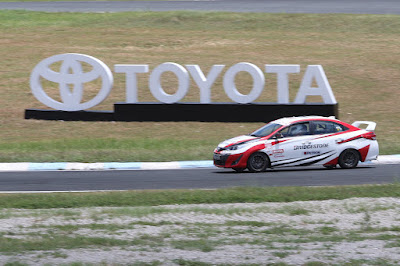 Toyota Motor Philippines (TMP) brought its premier motorsports program back to its roots at the Clark International Speedway in Pampanga with the staging of the Vios Racing Festival last week.

The Autocross Challenge is a timed competition wherein drivers navigate through an obstacle course one at a time; while the Circuit Championship is the classic format wherein all drivers are simultaneously competing against each other during laps, all using the One-Make Race (OMR) edition of the All-New Toyota Vios.

The OMR Vios racecar has been modified for optimum handling and performance given the two different racing formats.

“Today, we witness the first leg of the Vios Circuit Championship. This event will be the first time that the all-new Vios One Make Race model is going to be tested at the circuit tracks since its appearance as the official pace car in Filinvest, Alabang last 2018. I hope that you are all as thrilled as I am to see the All-New Vios in action,” said TMP President Satoru Suzuki as he formally opened the competition.

Incidentally, the Vios Racing Festival also became the venue for car fans and motorsports enthusiasts to have a surprise sneak peek of the new Toyota Supra in action. Suzuki personally drove the highly-anticipated Supra on the speedway to the delight of the event attendees.

“As our way of saying thank you for coming all the way here at the Clark International Speedway, I am very honored to announce that you are now among the first in Southeast Asia to see the 2019 Toyota Supra in the metal,” said Suzuki.

This year, there are three (3) categories for the Vios Circuit Championship: Sporting Class Promotional Class, and Celebrity Class, participated in by a total of 22 racers.

For the Autocross Challenge, Toyota continued its push for a more inclusive and accessible motorsports program by inviting Toyota owners, even those with no prior racing experience, to join the online contest via its official Facebook account. Winners were given a chance to be part of more than 50 Autocross racers who experienced the power and performance of the OMR Vios race car.

And just like Toyota’s past racing programs, the Vios Racing Festival is open to everyone who wants to watch the races and join the side activities with no admission fees.

Here are the list of winners from the Vios Racing Festival Challenge and Circuit Championship races:

The Vios Racing Festival will return to the Clark International Speedway for the second and third leg of the Circuit Championship in August and November respectively.
at 12:30 PM