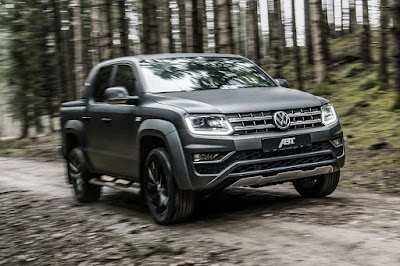 Remember ABT Sportline? The German tuners who were able to increase the Volkswagen Golf GTI’s power to 290 horsepower without voiding the warranty? Well, they’re at it again and this time, they’ve weaved their magic on the VW’s pickup truck, the Amarok.

The result? Enough power to worry a Honda Civic Type R. Using ABT’s Engine Control (AEC), the heart of all ABT Power performance upgrades, the Amarok 3.0 TDI is now rated at 306 horsepower and 630 Nm of torque—up from 258 horsepower and 580 Nm. Zero to 100 km/h is reached in just 7.8 seconds and top speed is 211 km/h—not bad considering this thing can carry a ton of payload and pull 3.5 tons. Imagine doing that in a hot hatch.

And while the 3.0 TDI is grabbing all the headlines, the same AEC upgrade applied to other Amarok models as well. The 224-horsepower variant gets bumped up to 265 horsepower, while the 2.0 TDI’s 180 horsepower is evened out to 200 horsepower.

ABT Sportline says their decision to tune the Amarok is because of Europe’s fascination with pick-up trucks. The company says that they now rank as one of the trendiest type of vehicles in Europe. It’s pretty much the same here in the Philippines, so we’re still hoping Volkswagen Philippines does bring it in!
at 6:00 AM