The 2019 Mazda3's Interior is a Treat for All the Senses 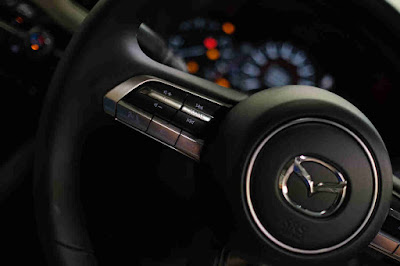 There seems to be no end to Mazda’s obsession to detail. For the all-new Mazda3, a car that starts their new-generation (7th generation) models, the carmaker put a lot of time in crafting the interior. The result is a car whose cabin doesn’t just satisfy the visual, but the tactile and aural senses as well.

Aiming to deliver a sense of unity throughout the interior space, designers erased visual noise by eliminating unnecessary parting lines, or changes in texture and surface. The resulting cabin forms a perfect horizontal symmetry with the driver at the middle, while a “less is more” ideal means moving certain functions like the climate control and air vents to follow the line of the instrument panel.

The obsession continues to areas like the center console lid whose “Karakuri” mechanism is designed to be operated with less strain; new switchgear that uses a combination of rubber and metal parts for a smooth, yet crisp feeling; and interior illumination with better light distribution and reduced variance in color.

The Mazda3 also debuts the newest version of Mazda Connect. Now equipped with dual CPUs, it boots up faster and can track a car’s GPS location in as little as two seconds by decoupling certain functions between the two processors. It also produces noise-less radio reception by moving the tuner receiver closer to the antenna. The interface is all-new with a more legible font (the same font is used throughout the cabin), and less sub-menus. And wanting to make the operation less distracting cognitively, the touchscreen has been eliminated and instead relies solely on the rotary Commander Control system.

Even the sound system hasn’t escaped attention. Designed even before the engine and chassis layout were finalized, the Mazda3’s standard 8-speaker sound system, called Mazda Harmonic Acoustics, takes into account how the human ear perceives sound. The result is a unique speaker layout where the low frequency speakers were moved from door to cowl and the mid-range speakers moved to the upper area of the doors from the dashboard. An 8-channel amplifier can also delay or advance sound delivery to each speaker individually to reproduce a direct sound.

As the carmaker moves to a more unique positioning, one that they term, “Mazda Premium,” they have left no stone unturned. With its current model line-up already setting the standard in interior design and craftsmanship, it looks like they are setting the bar anew. With human-centric design at its core, the all-new Mazda3 satisfies not just the visual, but the aural and tactile senses as well.