Why Did Honda Just Restore a Chevrolet Pick-Up Truck? 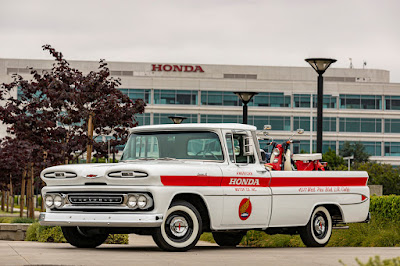 Shortly after American Honda Motor Co., Inc. (AHM) first opened for business in 1959, the company purchased a small fleet of Chevy pickups to deliver motorcycles to its fledgling dealers across Southern California. Underscoring their importance during those early days, American Honda restored a truck to help celebrate Honda’s 60th anniversary in the United States.

Tapping its U.S. archives and memories of retired Honda associates for details, a 1961 Chevy half-ton pickup was found and carefully renovated, replicating the original paint scheme as used by company salesmen delivering motorcycles to dealers to sell on a consignment basis. These trucks helped American Honda quickly establish a U.S. market foothold, starting in Southern California. By 1965, Honda was the best-selling motorcycle brand in America with a market share of almost 72 percent.

To ready the special truck for its debut at AHM’s 60th anniversary celebration, it was given a mild mechanical freshening plus new factory-correct white paint and hand-painted graphics like the originals. Two vintage motorcycles, a Honda 50 and CB160, like those originally carried in the trucks, are placed in the truck bed.

Plans for public display include the 2019 SEMA Show and other events around the U.S., as well as classic vehicle gatherings around Southern California. Ultimately, the truck will make its way to the American Honda Collection Hall in Torrance, where it will be staged in front of a replica of the company’s original Los Angeles office.
at 8:00 AM

Email ThisBlogThis!Share to TwitterShare to FacebookShare to Pinterest
Filed Under: Honda Corporate, News