These Technologies Can Help You "See" This Rainy Season 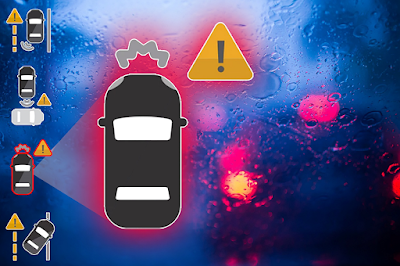 With the rainy season underway, drivers can expect wet conditions and poor visibility, so they need to be extra careful to avoid accidents. That said, some new active safety features can certainly help.

Did you know drivers in heavy rain are nearly four times more likely to veer from their lane than in clear weather condition? According to a U.S. Federal Highway Administration report, lane departure accidents account for more than half (51 percent) of all fatal crashes.

The good news is another study by the Insurance Institute for Highway Safety (IIHS) found that collision avoidance systems significantly cut the number of accidents and crashes.

These active safety features, or if you prefer another term, driver assist features, come with different names, so it’s best to consult your local dealer to find out if your favorite car or brand comes with them.

Lane Departure Warning is designed to help avoid crashes resulting from unintentional lane departures or without using the indicator by providing a warning via audible or visual alerts if the vehicle is crossing a detected lane marking without using a turn signal in that direction. Typically, the feature works at speeds above 40 km/h.

Another active safety feature that helps in poor visibility and heavy rain is Forward Collision Alert. This feature works at speeds of 40 km/h upwards and uses a high-resolution camera to scan for vehicles ahead, helping you maintain a safe distance to the car in front by alerting you to any potential crash risk with both audible and visual alerts. According to the IIHS, vehicles equipped with forward collision warning sees their crash rate reductions drop by 17 percent for all front-to-rear crashes, and 30 percent for front-to-rear crashes with injuries. Some automakers go a step further and include automatic braking in conjunction with the Forward Collision Alert.

When visibility is bad through the windshield, it is even worse in the rear and side blind zones. That’s where these features can make a difference:

Rear-Cross Traffic Alert uses radar sensors to warn you of vehicles crossing your path as you back out of a parking lot. Visual and audible alerts are triggered if moving vehicles are detected.

Side Blind Sport Indicators also uses radar sensors to help the driver “look” for other vehicles along the sides and warn the driver with LED-lit symbols displayed on the exterior mirrors.

While poor visibility is a major concern during the rainy season, so is wet road conditions. That’s why it is important to have technologies such as Traction Control, Electronic Stability Control, and Electronic Brake Force Distribution as well (read here for a detailed explanation of how they all work).

For those tackling less than ideal surfaces such as mountainous areas, these technologies can help you stay in control:

Hill Descent Control (HDC) allows for a smooth, controlled descent downhill by using the ABS braking system on each wheel. You can confidently take on steep slopes.

Hill Start Assist (HSA) works to stop the vehicle from rolling back when on a steep incline. When you move your foot from the brake pedal to the accelerator, it helps stabilize the vehicle by holding it stationary for up to 3 seconds.

When drivers get to their destination, they can rely on things like Front and Rear Parking Sensors and/or Cameras to help the driver park their vehicle and avoid crashing into nearby objects during low-speed maneuvering.

Regardless of your vehicle though, it’s critical to take note of the following when driving in rainy conditions:

Email ThisBlogThis!Share to TwitterShare to FacebookShare to Pinterest
Filed Under: Feature, Safety, Technology