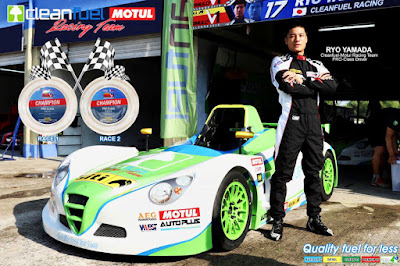 Formula V1 staged its first leg at the Batangas Racing Circuit with a total of 17 cars piloted by the country’s best drivers vying for championship points.

Among the top teams on this year’s grid is the Motul/Autoplus-Cleanfuel racing team. With Formula V1 champion Luis Gono sidelined this year for personal reasons, the team fielded actor Dominic Roque in the amateur class and veteran racer Ryo Yamada from Japan to run in the Pro Class category.

With his experience and driving skills, Yamada was able to clinch victory at the first race this season, successfully fending off other drivers. The feisty Japanese driver then replicated his success during race two, despite starting the race from fourth.

“It was a tough race and the Filipinos were no pushovers,” said Yamada. He had nothing but praises for the highly technical race track. “This is a good track with a lot of tight turns and fast straights,” he added.

The only incident that saddened the international racer was the way some drivers displayed a level of unprofessionalism resulting in a skirmish with a rival team during race three.

Despite this experience, Yamada and Team Motul/Autoplus-Cleanfuel will soldier on. “I will just make this unfortunate incident a positive experience and learn from it,” says Yamada.
at 10:11 AM