How a Football Injury Helped Shape the Mazda3's Human-Centric Design 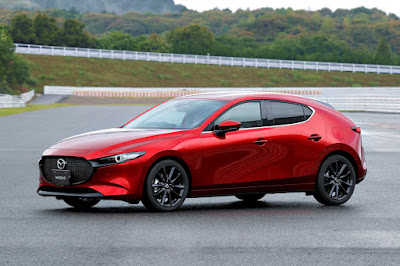 When the first-generation Mazda MX-5 went on sale in 1989, one person waiting in line overnight at the pre-order queue was Yasuyoshi Mushitani. Having joined the carmaker a year earlier, he was employed in Mazda’s vehicle test operations group, although football still took up most of his time.

Given the opportunity to train in the English Premier League, he injured himself on the soccer pitch. Facing months of physiotherapy and having to learn to walk again, he retired from football at the age of 21, and decided to dedicate himself to become an engineer.

Joining the Chassis Development team, Mushitani had to learn about cars, so he started as a vehicle durability test driver. From there, he absorbed everything he could, and today he is Mazda’s Technical Leader, Chassis Dynamics, Development Dept., Vehicle Development Division.

Despite his wealth of knowledge and experience, Mushitani’s football injury was what inspired him to evolve what “fun-to-drive” or, in Mazda’s terms, Jinba-Ittai meant.

Using a variety of handmade tools, including one that replaces the passenger’s seat with a balance ball-like exercise contraption, Mushitani along with his team of engineers helped form the basis of Mazda’s Human-Centric Philosophy—one that analyzes universal movements and psychological traits to define the ideal.

Mazda takes advantage of the human body’s natural balance ability to balance itself while walking. By promoting an S-shaped spinal curve (the posture of walking) even when seated, feedback from the road moves smoothly through the legs to the pelvis while also keeping the head at a stable position.

The Skyactiv-Vehicle Architecture, first seen on the all-new Mazda3 uses a variety of engineering solutions to realize this. From the reduced vertical spring in the tires to better absorb vibrations; the addition of damping nodes in the body; the increased longitudinal rigidity for linear energy transmission; and the S-shaped seats to keep the pelvis upright, engineers have used the tires, chassis, and seats to feed back road information to the driver making it feel like a natural extension of the human body.

“We have gone beyond just the numbers in the all-new Mazda3,” explains Kota Beppu, Program Manager for the all-new Mazda3. “Certainly, if you get a stop watch, it will be faster be it 0-100 km/h or around the circuit than the current model, but it’s more than that.”

As Mazda moves towards a new generation of models, expect them to talk less about benchmarking its rivals and rather, talk about what’s more important: the people. Human-Centric Design will be Mazda’s defining DNA and with that, they will engineer a car that behaves in line with human sensations and the innate sense of balance. With that, Mazda vehicles won’t just be fun speeding over mountain passes, but it will feel perfectly in tune driving at a car park. That is Jinba-Ittai.