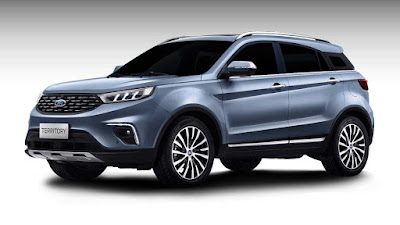 Ford Philippines is set to bring the all-new 2020 Ford Territory for the first time in the country to give Filipino customers a new SUV offering that will complement today’s modern lifestyles and needs.

Ford Philippines is the first market in the company’s International Market Group (IMG) composed of nearly 100 markets around the world to offer the all-new Ford Territory, which will reinforce Ford’s presence in the small and mini-SUV segments in the country.

Launching in the Philippines in August, the first-ever Ford Territory will deliver an appeal to young professionals and small families with its segment-leading features and capabilities offered at a competitive price point.

“The all-new Ford Territory is designed to empower the modern Filipino driver who don’t want to compromise features, space, technology and versatility in their vehicle,” said PK Umashankar, managing director, Ford Philippines. “With Ford’s heritage and global expertise in designing class-leading SUVs, we are confident that the all-new Ford Territory will resonate with Filipino customers looking for an all-in-one package in their SUV.”

Though the nameplate is shared with an Australian-developed SUV, the 2020 Territory is actually based off the Jiangling (JMC) Yusheng S330. Jiangling is Ford’s joint-venture partner in China. However, Ford is quick to point out that their R&D center in Melbourne had a hand in its development.

Not much is known about the local spec Ford Territory, but like most Chinese offerings locally, it’s likely to be powered by a 1.5-liter turbocharged 4-cylinder. In China, this engine makes 163 horsepower and is mated to a 6-speed automatic gearbox.
at 12:55 PM