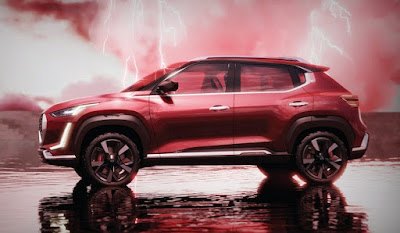 Nissan has finally shown its B-segment SUV in full. The Magnite is designed specifically for the Indian market and slots below the Kicks and Juke in terms of size, going against the likes of the Ford EcoSport.

The name is a portmanteau of “magnetic” and “ignite,” symbolic of this SUV’s importance for the Africa, Middle East, and India (AMI) region. It’s designed in Japan, but keeping in mind the requirements of the Indian market. The sub-4-meter SUV will offer cutting-edge technology, including Nissan’s Around View Monitor (AVM).

Officially revealed as a thinly disguised concept for now, the Magnite will enter into production next year for the Indian market with no indications as to its export plans.

The Magnite is one of eight new models confirmed by Nissan for the AMI region. The refreshed Nissan Terra has been confirmed by the Japanese carmaker to launch first in this market as well.

More official details will be announced nearer the production Magnite’s launch.
at 5:16 AM