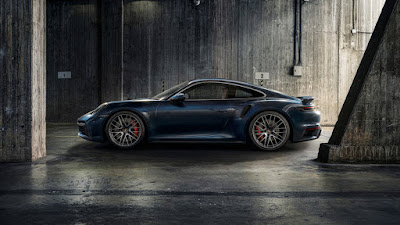 Like the recently introduced 2021 911 Turbo S, the 6-cylinder boxer engine in the new 911 Turbo has a displacement of 3.8 liters, and now features symmetrical VTG turbochargers with electrically controlled bypass valves. In conjunction with the redesigned charge air cooling system and the use of piezo fuel injectors, this improves throttle response, performance, torque delivery, and the free revving nature of the engine. Complementing the increase in power, the chassis has been tuned to offer an even greater level of performance.

A Lightweight package is also available which reduces the curb weight by around 30 kilograms. These include the deletion of the rear seats and reduced sound insulation.