The Ford F-150 AT44 is Perfect for the Zombie Apocalypse 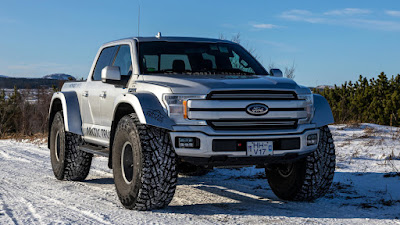 Artic Trucks, the same company behind the D-Max AT35 and the Navara AT32 has just revealed their latest project: the F-150 AT44.

Based off the 2020 4x4 Lariat Supercrew—you know, basically the same version sold in the Philippines, Artic Trucks has come up with this one-off build that gives Ford’s full-sized pickup 44-inch tires (hence the AT44 name).

In order to fit the giant 475/70R17 tires (each one weighs almost 70 kilograms), the F-150’s fenders have been re-shaped and the suspension lifted. No news whether Artic Trucks did some tweaking under the hood, but as it stands this version packs the 3.5-liter EcoBoost V6 which makes 375 horsepower.

According to Artic Trucks CEO Emil Grimsson, the F-150 required some special engineering know-how because of its weight (it may sink in soft snow). Moreover, he finds the F-150’s approach angle lacking, necessitating some care when approaching river banks. Still, they’re generally happy with its performance.