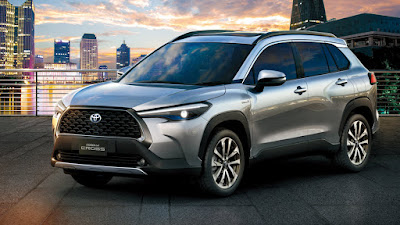 Okamoto said that much-awaited products such as the Hilux and Corolla Cross, both assembled and imported from Thailand, are on their way. In fact, he mentioned that being a global model, Toyota Motor Philippines will not be changing the Corolla Cross’s name when it lands locally.

The 2021 Corolla Cross is underpinned by the Toyota New Global Architecture (TNGA). But despite sharing its name with Toyota’s compact sedan, it uses a newly-developed torsion beam. Still, Toyota says the suspension has been enhanced for better grip and smoother ride, while improving the balance while driving straight and cornering.

In Thailand, this compact crossover comes with a choice between two engines: a 1.8-liter normally-aspirated 2ZR-FBE engine making 140 horsepower and 177 Nm of torque mated to a CVT. Meanwhile, the hybrid variant gets a 98 horsepower, 142 Nm of torque 1.8-liter Atkinson cycle engine coupled with an electric motor that produces 71 horsepower and 163 Nm of torque. The non-hybrid is said to deliver 15.4 km/L, while the hybrid goes up to 23.3 km/L.

The Corolla Cross is slated to arrive in Thailand showrooms by September of this year. It’s highly likely that the Philippines will be getting it around the same time.
at 4:01 PM