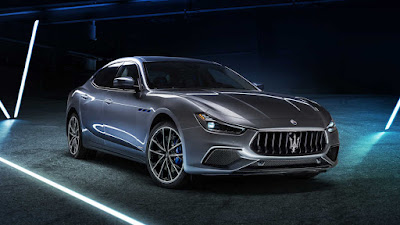 The new Ghibli Hybrid is considered to be one of the most ambitious projects for Maserati, which after the announcement of the new engine for its upcoming MC20 super sportscar sets the seal on another step towards the brand’s new era.

The choice to introduce the hybrid technology on the Ghibli sedan is no coincidence: this model, with over 100,000 units produced since its launch in 2013, perfectly embodies the brand’s DNA.

In fact, the challenge facing Maserati was to enter the world of electrification without altering the brand's core philosophy and values. The result? The creation of what they deem to be the best possible hybrid.

The 2021 Ghibli Hybrid is immediately recognisable, thanks in part to the new design of both exterior and interior. The common denominator of the restyling, developed by the Centro Stile Maserati, is the blue colour, chosen to identify all cars with hybrid technology and the new world they represent.

On the exterior, the blue color is found in the side air ducts, brake calipers, and the thunderbolt in the oval that encloses the Trident badge on the rear pillar. The same blue color appears inside the car, in particular on the embroidered seams of the seats.

The 2021 Ghibli Hybrid also introduces new stylistic contents, starting from the new front grille, with bars redesigned to represent a tuning fork, and which also evokes the Trident symbol itself. There are significant changes at the rear of the car, where the light clusters have been completely restyled, with a boomerang-like profile inspired by the 3200 GT and the Alfieri concept car.

Under the hood, Maserati has chosen a hybrid solution focused primarily on improving performance, while also reducing fuel consumption, and cutting emissions. The hybrid technology exploits kinetic energy the car accumulates when in motion, recovering it and transforming it into electricity during deceleration and braking, and storing it in a battery.

The powertrain, the outcome of in-depth engineering development work by the technicians and engineers of the Maserati Innovation Lab in Modena, combines a 2.0-liter turbocharged 4-cylinder engine with a 48-volt alternator, and an additional electric supercharger. This solution is unique in its segment, and is the first in a new generation of powertrains, with the perfect trade-off between performance, efficiency and driving pleasure.  The battery is mounted in the rear of the car, with benefits in terms of improved weight distribution.

This version weighs about 80 kilograms less than the Diesel. 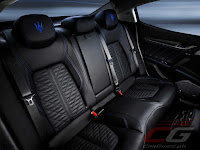 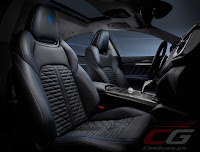 Thanks to maximum power output of 330 horsepower and torque of 450 Nm delivered from just 1,500 rpm, the new Ghibli Hybrid's performance data are very impressive: top speed of 255 km/h and acceleration from 0 to 100 km/h in 5.7 seconds. More importantly, the unmistakable sound that characterises all Maserati models has been retained thanks to the optimised exhaust, which includes specially designed resonators.

The Ghibli Hybrid also has the latest-generation multimedia system called Maserati Intelligent Assistant. The system, which runs on Android Automotive delivers an innovative user experience that’s fully customizable. The multimedia system’s high-definition screen contains new graphics and is more user-friendly. Its size is increased from 8.4 to 10.1 inches. A new instrument panel with digital devices and new graphics is also introduced.

The new Ghibli Hybrid represents the first step in a plan that will lead to the electrification of all-new Maserati models. The Brand's first all-electric cars will be the new GranTurismo and GranCabrio, scheduled for 2021.