Mercedes-Benz Isn't Too Pleased with the BAIC BJ80 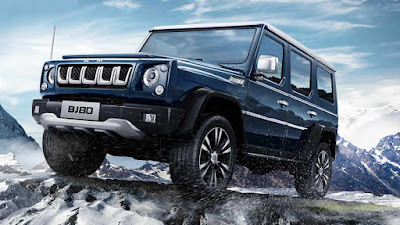 China does it again. After getting “inspiration” from the likes of the Ford Bronco and F-150 Raptor, here’s the BAIC BJ80. Oh, and before you look twice, no this isn’t the Mercedes-Benz G-Glass. But it comes pretty darn close.

The BAIC BJ80 is a full-blown luxury SUV that, like its Mercedes-Benz counterpart, is used by the military; of course, in this case, it’s the Chinese military.

The military version of the BJ80 is fitted with a 2.8-liter Cummins ISF turbodiesel engine—you know, the one you find in Foton CVs. It makes sense because BAIC and Foton are both within the same corporate umbrella. In this guise, it makes 160 horsepower and 360 Nm of torque.

The civilian version though uses a turbocharged 2.3-liter 4-cylinder gasoline engine making 250 horsepower and 350 Nm of torque. And being a luxury SUV, this is paired to a 6-speed automatic. Weighing in at 1,830-plus kilograms, it won’t be fast; however, at least it comes with part-time four-wheel drive, a rear locking differential, and even a dedicated snow mode.

Oh, and given its G-Class aspirations, the BJ80 also comes fitted with all sort of baller-type features like Nappa leather seats, rear entertainment system, sunroof, and even 20-inch wheels.

Given its positioning as a luxury off-roader, the BJ80 is not cheap. It tops out at 398,000 RMB or around P 2.8 million pesos. And that is for the Everest trim.

Taking their love for Mercedes-Benz’s G-Class to the next level, BAIC also came up with a version inspired by the limited run G 63 AMG 6x6. Don’t expect a twin-turbo V8 under the hood though. The Chinese version though combines the same proven 2.3-liter motor with a plug-in hybrid powertrain with in-wheel motors in the last axle developed by Protean Electric.

What does Mercedes-Benz think of the BAIC BJ80? Well, Mercedes-Benz’s very own spokesperson Toby Mueller took to Instagram to point out his displeasure. However, BAIC is Mercedes-Benz’s joint-venture partner in China. They also own 5 percent of Mercedes-Benz’s parent company Daimler. This all points out to Mercedes-Benz probably turning a blind eye to BAIC’s rather impressive efforts.
at 9:09 AM