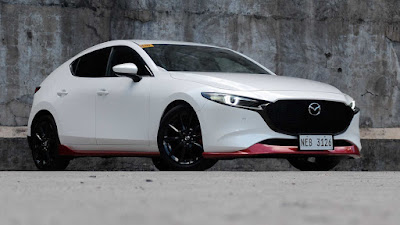 Let’s get one thing out of the way first: the Mazda3 edition100 isn’t the same as the Mazda3 100th Anniversary Edition model. The latter is made to celebrate Mazda’s centennial, while the former is a special edition made to commemorate the Mazda3’s win as the World Car Design of the Year. Oh, and another thing: while it’s unsure whether the Philippines will get its hands on the 100th Anniversary Edition models, it’s sure that 50 of these non-serialized edition100 will be made available at Mazda dealerships nationwide. Makes sense? Good.

With all that sorted out, let’s focus now on what you get with the edition100. A P 100,000 more than the Mazda3 Premium Sportback or P 20,000 more than the Mazda3 Speed Sportback, the edition100 is primarily an appearance package that’s supposed to highlight the compact hatchback—sorry, Sportback’s award-winning design. What you get is basically the Speed body kit painted in Soul Red Crystal, red-colored brake calipers, high-gloss black 18-inch wheels, and a front plate relocator. It doesn’t sound like much, but if you attempt to do all these outside, the cost will be more or less the same. In short, the edition100 adds a unique twist to an already eye-catching design without the hassle of having to navigate through various paint shops and the like. It’s instant gratification at its finest.

The question is: is it enough? That all depends on your point of view. If you want something that doesn’t distract from the aesthetics of the World Car Design of the Year, but still adds a bit of pop, the edition100 gets it mostly right. Before this came around, the Speed’s high-gloss black kit came across to some as too subtle. It’s a “blink-and-you’ll miss it” affair, especially in color like Jet Black or Snowflake White Pearl—two of the three colors chosen for the edition100. The Soul Red Crystal accents now draw the eye immediately to the Mazda3’s form, especially to its use of “Yokahu,” or the beauty of empty space. It’s tied to Japanese Buddhist teachings that don’t see emptiness as a lack, but as a field of infinite potentiality bringing structure, balance, and definition. It’s in this empty space where light and shadow are made to interplay—giving life to “Utsuroi” or the changing of life.

Sadly, because the eyes get drawn to the design, certain elements of the Mazda3 edition100 come into scrutiny. First up, is the plate relocator. It’s a godsend to owners who’ve always found that the front plate ruins the large grille, but at the same time the exposed plate screws look like an eyesore especially when viewed from the side. Personally, if I were to get an edition100, I would ask for the front plate to be put back to its original place. Second, the general consensus is that the side mirrors deserve the Soul Red Crystal treatment too. It’s understandable that Mazda Philippines wanted something different with the edition100, but most people who saw the car in person said it looked “kulang”—a colloquial term meaning, “lacking.”

Unlike other World Car of the Year Awards, the World Car Design of the Year is the only one where both journalists and an expert panel had to come up with a consensus on which vehicle pushed the boundaries in innovation and style.

With that, the Mazda3 didn’t simply push the design envelope in terms of exterior design; it did so inside as well. The very same uncompromising approach is found in the interior. Not a single button, stalk, or control is out of place. It’s come so far that it feels like the product of one company, Mazda, as opposed to an assembly of a dozen or hundreds of different suppliers. The approach here is one of minimalism, and with that, controls are hidden from plain sight. Yet, unlike efforts done by anyone else, remains easy to use and understand.

In creating the new Mazda3, engineers say they didn’t seek out the competition. Instead, they sought the help of psychologists and ergonomists to find out how the human body behaves, and how mundane things like button clicks and stalk engagement elicits feeling of joy. True enough, no other compact car can come close to this in terms of personal enjoyment.

Mazda calls their new design philosophy, “Evolved Kodo,” but I’d rather prefer the other term they coined for it: Car as Art. In a time where carmakers have either been busy evoking nostalgia or have been coming up with repetitious designs for the sake of simplicity or quicker turnaround times, the Mazda3 is much more emotive. It’s a compact car that’s actually sensual. It’s for this reason why it’s deserving to be called the World Car Design of the Year—the second for Mazda since the MX-5 won the accolade in 2016.