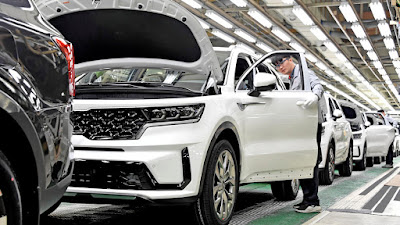 The next-generation Sorento has started to roll off the production line. Confirmed by Kia Motors, the first batch of their mid-sized SUV is destined for Europe.

Built to Kia’s exacting production standards, the new fourth-generation 2021 Sorento is manufactured at Kia’s Hwasung production facility in Korea, with hybrid, gasoline, and diesel variants of the SUV assembled on the same production line.

The first batch, the hybrid model is destined for the European market. Kia says the outgoing third-generation Sorento is built on the same production line, but that’s expected to wind down soon. The Sorento will also be built in Georgia, U.S.A. for the North American market.

The Sorento has been a mainstay of Kia’s global line-up for almost two decades, more than three million Sorento models have been sold worldwide since it was launched in 2002. European sales of the fourth-generation Sorento are due to commence in the third quarter of 2020; the car will be available to order in most of Kia’s global markets by the end of the year.

Towards the end of 2020, the new Sorento will also be available in certain markets for the first time as a Plug-in Hybrid, with production due to start at Hwasung later in the year.
at 11:37 AM