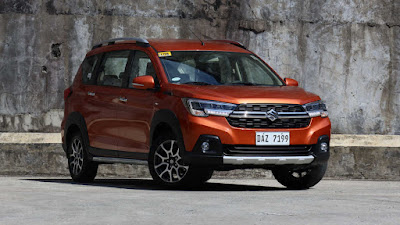 The modern family man doesn’t want to be seen driving an MPV, kiddos and doggos be damned. Whether it’s because he’ll get more respect on the road, or it’s easier on the eye, SUVs are the way to go. It’s for this reason why carmakers have been churning out SUVs of late which are basically MPVs with additional body cladding and ride height. The latest one to join the fray is the Suzuki XL7. Albeit they’re late in joining the party, if their efforts on the Ertiga is any indication, then you’re in for a treat.

The Ertiga’s transformation into the XL7 starts with the exterior. While it’s dimensionally close to the MPV on which it’s based on, it’s ever-so-slightly longer (55 mm), wider (40 mm), and taller (20 mm). In the real world though, the difference is negligible—about as long as your pinky finger at the most. Using the same base, Suzuki’s best decision here has to do with the XL7’s unique embellishments. By enlarging the grille and headlights, adding cladding, and roof rails, it’s now got a stronger road presence. It works so well that it won’t be surprising to see some of these elements make it the facelifted Ertiga in the future.

Viewed in profile, it’s easier to see that the entire front-end is new, down to the squarer fenders that incorporate Vitara-like pseudo vents. There’s an additional 20 mm of ground clearance over the Ertiga too, but honestly, it’s hard to see where that went. Regardless, there’s no doubting the practical nature of the XL7. Done out of practicality, the rear doors are clearly longer than the front, and the roofline’s been squared off. Its glass-to-metal ratio is also much larger, benefiting not just visibility but passenger comfort as well.

True enough, open the XL7’s doors and it feels welcoming enough. Even at their lowest setting, the seats are mounted high. Not much separates this from its Ertiga sibling, and that’s generally a good thing. With the exception of the new carbon fiber applique that replaces the MPV’s sweeping wood treatment, it’s pretty much the same. Ergonomically, it’s straightforward, but the 10-inch infotainment system feels a bit too gimmicky. The larger screen makes for bigger on-screen controls (they’re easy to “shoulder read” even from the car beside, but it still can’t replace the tactile feel of real physical knobs and buttons. Still, it’s great that Suzuki’s loaded it with Apple CarPlay and Android Auto as standard (are you listening, Toyota?)

Sharing its HEARTECT platform with the Ertiga, the XL7 is exemplary packaged. There’s good space across all three rows, especially in the rearmost where it’s habitable even for long, out-of-town trips. A two-tier floor frees up to 199 liters of room with the third row up, enough to fit luggage vertically. Fold the third row down and it’s up to 550 liters; fold the second and third rows, and it tops out at 803 liters—bigger than the BR-V. Space aside, the XL7’s second-row seats have a single-action lever that slides and moves the seats to aid access to the third row. Meanwhile, the third-row seatbacks recline up to 16 degrees.

Despite the XL7’s directness, there are some rather gimmicky bits such as the vertically-resting dials and the full-colored 4.2-inch multi-info display which can, among other things, display real-time power and torque figures, as well as g-forces. It’s funny and odd as to why Suzuki decided to fit this into a family-friendly SUV as opposed to something like the Swift, but hey, at least you can applaud them for being different.

Anyone who’s driven the Ertiga will know exactly what it’s like to drive the XL7. The suspension is softly sprung and pliant though larger potholes do thud through the cabin. It’s also remarkably hushed at low speeds, partly due to Suzuki’s decision to fit passenger car tires (195/60R16) as opposed to slightly noisier SUV tires. Still, at highway speed, some road noise does tend to permeate the cabin. As a driver, the XL7’s HEARTECT platform and lowish curb weight (1,180 kilograms) pay dividends in that it feels quick and lithe. The steering is pretty darn close to that of the Swift—and that’s saying a lot, but it does tend to feel skittish at medium speeds, before settling nicely at higher speeds.

As for engine response, the XL7 has good pull initially, and if the accelerator’s pressed down, it’s also borderline sporty at the top-end. However, the mid-range feels quite flat. A successful overtake will require some cooperation from the 4-speed automatic so it’s a missed opportunity to fit some sort of manual override or sports mode here. Regardless, driven in the city, the powertrain is largely likeable and can help this 7-seater SUV hit 9.52 km/L (average speed of 16 km/h).

Feature-wise, it’s hard to fault the XL7. Priced at P 1.068 million, the sole GLX variant has the sort of convenience and luxury features sought after by any modern family: push-button start/stop, an infotainment system that can play both music and video, dual air conditioning, dual SRS airbags, ABS with EBD, stability control, and even rear parking sensors with a back-up camera. What’s funny though is the decision to delete the rearview mirror’s anti-dazzle function—a feature that’s pretty much standard on any other modern automobile.

With the XL7, Suzuki’s shown everyone once more why they’re the king of kei. By employing techniques they’ve used on making sub-compact hatchbacks and sedans, they’ve come up with a likeable 7-seater SUV too. At this point, the only question hanging over the XL7’s head is this: is it worth the P 80,000 premium over the similarly-speced Ertiga GLX? Honestly, the answer is a resounding yes. Putting the preferred SUV styling aside, the XL7 comes with LED headlights, larger wheels, part PVC seats, a full-color multi-info display, smartphone connectivity, and most important of all, electronic stability control—features which are worth their weight in peso.