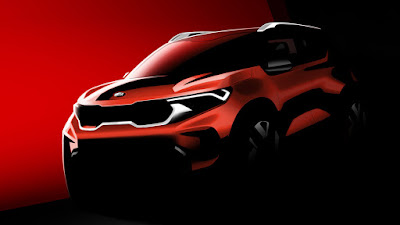 After the Nissan Magnite, Kia is now ready to show the world what its sub-compact SUV looks like. Shown as a sketch is the production version of the Sonet SUV. If the name’s familiar, it was unveiled as a thinly-veiled concept at the 2020 Delhi Auto Expo.

Adhering to India’s size (and tax) requirements, the Sonet is expected to be smaller than the allowed 4-meter overall length. Yet, based on the renderings, it keeps the concept model’s strong road presence. It combines the signature tiger nose grille with a new three-dimensional ‘stepwell’ geometric grille.

Not much is known about the Sonet, but given that it’s a platform twin of the Hyundai Venue, expect it to carry the same engine choices: a 1.0-liter turbocharged gasoline engine or a 1.2-liter diesel. The former was just introduced with a clutch-less manual gearbox.

The Sonet will unveiled to the world in a few weeks time, and will be produced in India. Kia hasn’t indicated whether they’ll be exporting the Sonet to other markets, although they’ve confirmed that it won’t be made available for Europe.
at 5:58 AM