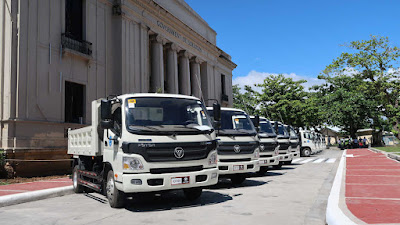 The Gateway of Southern Philippine Islands has opened its path again to Foton, as the Province of Sorsogon collaborates with the quality-trusted commercial vehicle brand for mobility needs that will be used for their programs in infrastructure, sanitation, and calamity operations.


Last June 29, Governor Chiz Escudero and the members of the Provincial Council Members warmly welcomed the Foton team as they traveled to Sorsogon for the turnover of 13 brand-new units of Tornado 4.4C Mini Dump Trucks which will also be used for provincial improvement needs such as road maintenance, relief operations, and other public works and services. The service vehicles will be placed under the care of their Provincial Engineering Office.

In the past years, the Government of the Province of Sorsogon had acquired a series of Foton Ambulances that assisted in their public health transportation. Particularly in 2010, they gathered 3 units of Foton Ambulance and received 4 additional units in 2016.

Every Tornado 4.4C Mini Dump Trucks purchased by the Province of Sorsogon is capable of loading up to 4,590 kilograms of heavy cargo with its 4 cubic meter dump box capacity. They are powered by the Cummins ISF 3.8 diesel engine mated to a 6-speed manual.
at 12:27 PM