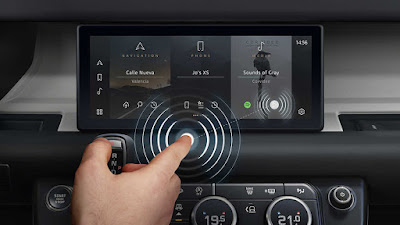 Okay, here’s something that defeats its own purpose: a touchless touchscreen. Yeah, that’s right. Concerned with the spread of bacteria and viruses in a post-COVID-19 world, Jaguar Land Rover will be teaching its touchscreens to predict the input of its driver.

Lab-tests and on-road trials showed the predictive touch technology could reduce a driver’s touchscreen interaction effort and time by up to 50 percent, as well as limiting the spread of bacteria and viruses.

Uneven or poor road surfaces can often cause vibrations that make it difficult to select the correct button on a touchscreen. This means drivers must take their attention away from the road, increasing the risk of an accident.

The technology uses artificial intelligence to determine the item the user intends to select on the screen early in the pointing task, speeding up the interaction. A gesture tracker uses vision-based or radio frequency-based sensors, which are increasingly common in consumer electronics, to combine contextual information such as user profile, interface design, and environmental conditions with data available from other sensors, such as an eye-gaze tracker, to infer the user’s intent in real time.

While Jaguar Land Rover’s efforts are applaudable, why can’t they just go back to regular buttons instead? Or at least come up with a touchscreen that minimizes driver input errors. Jeez.
at 3:37 PM