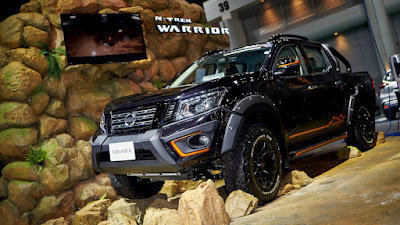 Nissan has taken a rather interesting route in introducing the Navara N-Trek Warrior for the Thai market, and this makes it rather different from the one launched in the Australian market (despite what other outlets have you believe).

Originally, it was a special edition model made for the Australian market by Premcar (which traces its roots to Prodrive UK). For the Thai market though, Nissan has chosen to a local Thai partner—City Auto Mobile. With that, the first difference lies in the warranty. In Australia, the Navara N-Trek Warrior carries the same Nissan manufacturer’s warranty, while in Thailand, the warranty for the accessories package is separate from the rest of the truck, and stands at just 1-year / 20,000 kilometers.

The second and bigger difference is that while the Aussie version is billed as the most capable Navara ever and thus comes solely with a 4x4 drivetrain. Meanwhile, the Thai version is an accessories package and can actually be ordered in both 4x2 and 4x4 version. However, Nissan Thailand says production is capped at just 300 units split between the two versions.

Regardless of the differences, it’s still amazing how Nissan Thailand tried to stay true to the Navara N-Trek Warrior’s original design. Like its counterpart down under, it gets 32.2-inch Cooper tires mounted on 17-inch alloy wheels (275/70R17), a steel front bumper, and orange accents spread throughout. Even the suspension’s been modified (shock absorbers and springs mostly) to raise the ride height. Nissan Thailand didn’t say by how much, but it’s probably close to the 40-mm standard set by Nissan Australia’s version.