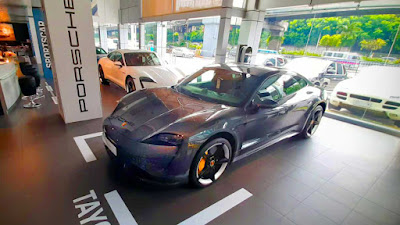 It took a jab from a premium segment competitor, but Porsche Philippines just had to raise their hand and officially say that its zero emissions sportscar, the Taycan is now officially available after a lengthy tease. Though it comes in three variants globally, locally only the flagship Taycan Turbo S is being offered.

The zero emissions Porsche Taycan Turbo S can generate up to 761 horsepower and can hit 100 km/h from a standstill in just 2.8 seconds. Driving range is rated at 412 kilometers.

The first production electric vehicle with a system voltage of 800 volts instead of the usual 400 volts, the Taycan boasts of quicker battery charge times.

To support the Taycan’s launch, Porsche Philippines has partnered with ABB, a Swedish-Swiss multinational technologies company to supply high-powered DC chargers. Delivering 175-kW of power, it’s the first of such type in the country. Using this system, the ABB unit can recharge the Taycan Turbo S from 10 to 80 percent chare in just 30 minutes. A charging time of around five minutes using the 175-kW charger can yield up to 65 kilometers of driving range.

Each Taycan from Porsche Philippines comes with a Porsche Mobile Charger Connect, an AC charger with a 5-inch touchscreen display including smart features such as adjustable current rating, charging history, and PIN lock.  The charger can be plugged into any household socket, or into an industrial socket for faster charging time (as quick as 9 hours).

Despite its four-door configuration, Porsche says the Taycan is a genuine sportscar more related to the 911 than the Panamera. The Taycan pairs typical Porsche performance and connectivity with everyday usability, and its advanced production methods and features set new standards in sustainability and digitalization.

Price for the Taycan Turbo S, like other Porsche vehicles locally, is available “upon request.”
at 12:25 PM