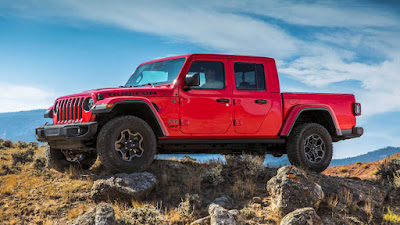 Announced during its global unveil two years ago, Jeep finally says its monster diesel engine is now officially available on its Gladiator pickup truck. This boosts its fuel efficiency to deliver the model’s highest driving range ever.

For 2021, the Jeep Gladiator will be offered (at least in the U.S.A.) with the 3.0-liter EcoDiesel V6. It’s rated at 260 horsepower and 599 Nm of torque. It comes with idle start/stop and a re-calibrated 8-speed automatic.

The 3.0-liter EcoDiesel V-6 uses dual overhead camshafts (DOHC) with four valves per cylinder and a 60-degree angle between the cylinder banks. The block is cast with compacted graphite iron, which provides strength to dampen vibrations, but weighs less than gray cast iron. A compacted graphite iron bedplate adds rigidity to the block.

Meeting the U.S.’s emission requirements, it’s fitted with a 19.3-liter diesel exhaust fluid which will require re-fills every 16,000 kilometers.

While the 3.0-liter EcoDiesel V-6 engine is produced at the FCA Cento facility in Ferrara, Italy, there’s no news if this powerplant will be made available outside of North America. Currently, Jeep distributor Auto Nation Group (ANG) has only brought in gasoline-fed variants of the Jeep Wrangler and Gladiator to the market.
at 8:14 AM