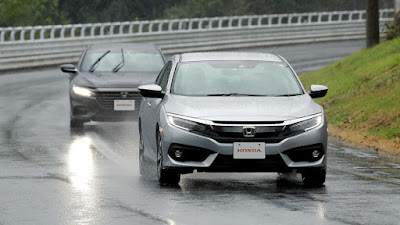 Ever since Honda’s founding 71 years ago, they’ve committed to deliver new values for mobility through their broad range of products from motorcycles, power products, automobiles and even jets. Today, with their 2030 Vision as a guide, Honda aims to continue doing just that, but now adding the “joy of expanding their life’s potential” as an additional guiding ethos.

While electrification has taken centerstage, safety also forms an integral part of their future. With “Safety for Everyone” as their guiding concept, Honda sees this as a way for people to enjoy new encounters and discoveries, and at the same time, mitigate anxiety and risk from driving at the same time.

These technologies certainly serve as the building blocks towards creating fully autonomous cars, something Honda has admitted to developing, but they don’t see it as a clash to the brand’s sporty positioning either.

More than anything, it’s all about adding comfort and reducing fatigue says Honda’s team of engineers. It’s not about relinquishing control to a bunch of sensors and a computer. It’s about personal growth and empowering drivers, whether inexperienced or seniors, who would otherwise be unconfident about their skills behind the wheel. Ultimately, the driver will always be in control, as it should be.
at 2:29 PM