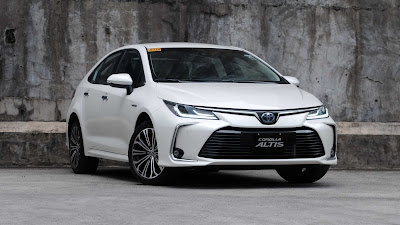 Since its appearance in the Philippine market, the Corolla has built a stellar reputation based on three pillars: quality, durability, and reliability. They may not be the sexiest adjectives to put on a brochure, but they’re enough to convince more than 220,000 Filipinos to spend hard-earned money on one. True enough, everyone knows someone who’s owned a Corolla at least once in their life, and they’ll be the first to tell you that unexciting as it is, they’re built to outlast the apocalypse. And that’s a bit troubling for Toyota’s top man, Akio Toyoda who wants a bit more excitement in his cars.

Style-wise, it’s hard to see where all this talk about excitement has gone. Yes, it has an all-new platform and yes, there’s a newfound edginess to the design and it’s more cohesive from tip-to-stern too, but by and large, it’s more evolutionary than revolutionary. It’s the automotive equivalent of wearing head-to-toe Uniqlo—it’s visually agreeable, if a bit plain. Still no one will call the attention of the fashion police, and for most buyers, that bit of obscurity is golden.

The same can be said about the Corolla Altis’s interior: solid, well-finished, but largely inoffensive. Toyota’s tried doing the whole minimalist thing here too, but they didn’t do it convincingly. There have been attempts to break up the large expanse of plain, black-grained plastic, particularly from the front passenger’s side, but the end result is still quite drab. Moreover, there are some unexplainable elements too like how the dashboard is higher than the front door trims making the front port windows close to being rendered useless. Truth be told, the straightforward, surprise-free cabin is closer to Shinzo Abe’s stern disposition than Marie Kondo cheeriness.

Now, while the Corolla Altis won’t win any interior design contests anytime soon, it does win in one crucial aspect: practicality. Despite its doom-and-gloom color scheme, front or back, it feels airy with lots of head, shoulder, and legroom to go around. The seats themselves look great and are supportive, though finding the perfect driving position can still be elusive. In the end, you’ll simply settle for one that’s “good enough” and you learn to live with it. Driving long distances are quite alright, but the pedals are still a bit off-center resulting in a numbed out right butt cheek.

The glove box is deep, and surprising for this day and age, lit; while the padded arm rest opens up, swallowing most knick-knacks. Weirdly enough, this is where you’ll find the only 12-volt charging port on offer so good luck if you drive around with a dash cam. More minus points go to the archaic-looking infotainment system, too. Not only doesn’t it offer standard Apple CarPlay or Android Auto, but the thick, almost one-inch bezel and lack of physical controls amplifies its aftermarket appearance.

Despite the blue exterior highlights and “Hybrid” badging found all throughout, driving the Corolla Altis Hybrid doesn’t differ from driving a conventionally-powered compact car and that’s the whole point. There’s no special start-up procedure and there’s nothing to charge; just push the “Engine Start” button, wait for the “Ready” to flash on the instrument panel, and you’re ready to go.

Well, okay, because Toyota’s hybrid system is aggressive at engaging its EV mode, driving off in dead silence is a bit eerie, but aside from that, it’s pretty much a normal car.

The electric motor in the Corolla Altis Hybrid already makes a healthy 71 horsepower. Already outpowering the Wigo by around five horses, it comes as no surprise that by default, it’ll use this as aggressively as possible to pull itself around. Only when extra jolt is required or when the battery’s charge is low will it call up the assistance of the 97-horsepower 1.8-liter 4-cylinder engine.

When it does, it’s actually hard to tell which engine is running except for the constant annoyance caused by the throttle pedal’s vibration (if vibration is present, then the internal combustion engine just kicked to life). That said, push it hard and you’ll find that this Atkinson cycle engine isn’t the most pleasing engine out there—it fills the cabin with a loud, droning sound. Again, the Corolla Altis Hybrid is all about sensible, fuel efficient motoring so for as long as you stick with that, the experience is quiet and refined. And speaking about fuel economy, its figures are single-handedly the unbeatable aspect here: 20.833 km/L in a mixed city/highway setting (average speed of 20 km/h) and 21.73 km/L in the city (average speed of 14 km/h).

Like the engine it’s attached to, the accompanying transmission, the E-CVT is tuned for everyday motoring than canyon carving. It prefers to keep itself in the background, continuously shuffling its ratios to keep the engine revs down and the speeds up. It’s especially great at keeping the electric motor happy, and with a special brake regeneration mode (designated “B” on the shifter), it tops up the battery quickly. However, command an overtake and things take a split-second before everything comes to life. Again, always remember to ingrain this in your head: sensible motoring, not sporty motoring.

The changeover to the TNGA platform has also given the Corolla Altis better road manners than any model before it. High speed driving still isn’t a strong suit and and it certainly won’t qualify as being exciting, but at least it feels sturdy, stable, and obedient enough through corners. The chassis too are well set-up in that they soak up bumps without any noticeable float or wallow. More than anything, it apes the current-generation Subaru Impreza in its solidity, so that’s saying something.

However, there’s still no mistaking the extra heft around the middle due to the nickel-metal hydride batteries. Throw it into a corner, and you’ll feel them like a pendulum. This reduces the Corolla Altis’s feeling of immediacy, a problem when you want to attack switchbacks. Furthermore, the brakes do suffer from the typical hybrid setback: an artificial-feeling pedal. There’s bite, but its on/off nature has largely to do with its regenerative properties.

Priced at P 1,580,000, the Corolla Altis is P 395,000 more expensive than the similarly-equipped 1.6 V variant. For some, the price gap is justifiable because the hybrid is the more environmentally-conscious choice. And since it’s the only variant with Toyota Safety Sense, some may be swayed for safety reasons. In both cases, their arguments are valid, but there’s no escaping that at the end of the day, the look and feel, especially the interior is more sensible than premium. There’s simply no attempt to level up the compact car experience here save for the engine and the safety features.

In the end, the Corolla Altis’s road manners summarize what this entire car is: excitement still isn’t its middle name. Thanks to a frustrated Toyoda-san, the radical decision to re-do it from the top-down has resulted in the best, most sorted Corolla Altis ever. However, in the greater scheme of things, it’s still at its heart, a commuter car. It’s a better commuter car, but a commuter car nonetheless. And that’s not such a bad thing. It’s certainly not the enthusiasts’ choice, but it doesn’t make it less worthy of consideration.