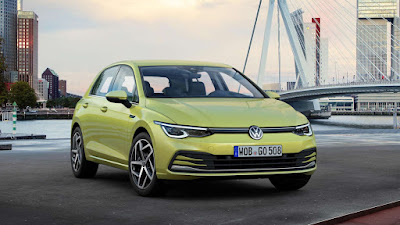 The all-new 8th generation Volkswagen Golf has landed and with it brings progressive updates that include digitalization and electrification technology. It’s set to launch on the market first in Germany by the end of this year with the rest of the world to follow.

An evolutionary version of the company’s MQB platform underpins the Golf and with that brings Volkswagen’s most recent innovations such as electrified powertrains. All gasoline and diesel engines in the new Golf are turbocharged bringing their outputs anywhere between 90 horsepower to 300 horsepower. There are two 3-cylinder gasoline versions and two 4-cylinder diesel ones. The TSI variants in particular feature the Miller Cycle for improved fuel consumption and emissions, while the TDI applies its exhaust treatment twice to cut emissions by as much as 17 percent.

Outside, the new Golf continues a more evolutionary approach with the C-pillar remaining the most dominant feature. LED lighting technology replaces all conventional exterior lighting and as such, Volkswagen says this now becomes an unmistakable new styling element of the Golf as well. While its proportions remain unchanged, the front-end has been lowered for better aerodynamics.

Inside, the Golf uses a “digital cockpit” with touch buttons and touch sliders. The German carmaker says this will change the way it’s driven and operated and is thus comparable to the debut of the first ever, touch-based smartphone. Apart from the merging of the 10.25-inch digital gauge cluster and 8.25-inch center infotainment display, the new Golf also changes the way functions are operated. For example, the lights are now operated by a digital panel to the left of the instruments, while the center console features a shift-by-wire shifter.