At a Mazda Fan Event? Skip the Shirts and Look for These Limited-Edition Paintings Instead 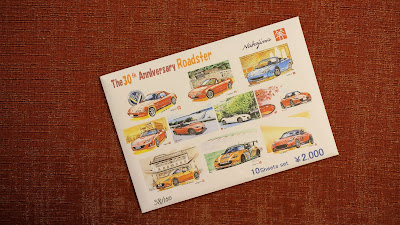 At Mazda fan events in Japan, it’s always a great idea to snag a souvenir: a cap, a sticker, maybe even a shirt or two. Next time though, skip the usual and keep an eye out for these limited-edition watercolor paintings done by no less than the designer of the original Mazda RX-7, Mikio Nakajima.

Limited to just 100 sets and sold only during the 30th Anniversary Meet at the Miyoshi Proving Ground, this set of 10 postcard-sized watercolors commemorates Mazda’s iconic roadster painted to look like they’re touring around the Japanese countryside. It’s the latest from Nakajima’s “Mazda Car Postcard” series which featured cars such as the Mazda Cosmo, the 787B, and more.

Born in Tokyo in 1950, Nakajima-san is the son of a metal-carving master. Greatly influenced by his father’s work, which was of a high enough standard to have been commissioned by the emperor of Japan, Nakajima pursued design as a profession.

He joined Mazda in 1971, sketching and designing the grille and door handles for the Series II Cosmo. Nakajima continued to design production models until the global oil crisis of 1973, which hit Mazda hard.

Despite the slow down in car development, Nakajima and his colleagues made the most of the ensuing downtime to do some serious research, with the blessing of Mazda’s design boss at the time, Matasaburo Maeda.

At the time, the Japanese carmaker was planning to kick off a sports car project, and the design division was exploring various ideas for that car, so they held an internal design competition. Impressed by his findings, Nakajima and his team won, their proposal eventually becoming the first-ever Mazda RX-7.

Nakajima’s success at Mazda is more than just about winning design competitions though; it’s also a story about perseverance. Unknown to most, he had a handicap which could have jeopardized his career as a designer: partial colorblindness. Yet, he overcame this disability to create one of the most stunning Japanese sportscars of all time.

Moreover, his disability didn’t stop him from finding a new love: water color painting in the mid-1990s. Starting out with landscapes and buildings, he soon moved to subjects he knows best: Mazda vehicles. 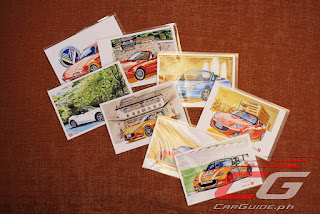 When Nakajima retired in 2010, he started a new life working as a freelance designer and watercolor artist, even regularly exhibiting his work. Today, not only is he responsible for the official posters for Mazda Fan Events in Japan, but he teaches painting as well.

During an exhibit of his work, Nakajima said, “Cars are not merely tools for getting around, in so many ways they are vessels for our precious memories. There are the cars we used in our daily lives with our family, the car we first bought, the car we used for work, the car we always wanted, and so on. I hope that that work helps people to recall all the emotions of those times and help to enrich their lives today and in the future.”
at 10:47 AM