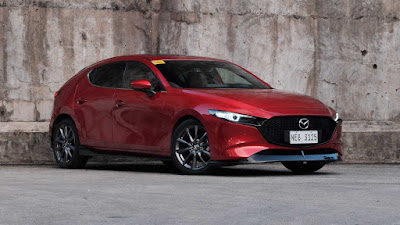 Mazda says the time for buying a compact car for practicality is now over; that role now goes to crossovers and SUVs which are the new-age family cars. With that, compact cars are all about style, emotion, individualism—things which are innate in the all-new Mazda3. Above all, it’s impressive because of how everything comes together. It’s a cohesive, unified whole—as if designers and engineers were always in sync and in the process, creating a car that’s best described as, “art that you can drive.”

The Mazda3 is a sight to behold, especially when decked in a signature color such as Soul Red Crystal. The long hood, slightly tapered waist, and absence of needless plastic trimming make it one of the most evocative cars of any price. It commands a second look whenever it’s parked for the night, and will truly standout of any carpark. Its design is also the first reminder on how far Mazda would go on its quest to create automotive art. The thin A-pillars necessitated the world’s first application of ultra-high strength steel; the cleverly-hidden wipers integrate the washers and uses a new type of motor; the door handles are of a single piece; and the lighting units serve as both headlights and front fog lights. A slight deviation in any of these would have altered the design, so it’s very clear that Mazda took no shortcuts whatsoever.

The very same uncompromising approach can be said about the Mazda3’s interior. Open the door, get in, and take a deep breath—the smell of leather permeates every inch of the cabin. The seating is low, the dash high—it’s all a bit cocooning, personal, and different. As cohesive as its exterior is, the interior is even more so. Not a single button, stalk, or control is out of place. It’s come so far that the Mazda3 feels like the product of one company, Mazda, as opposed to an assembly of a dozen or hundreds of different suppliers. The name of the game here is minimalism and with that, controls are hidden from plain sight. Yet, unlike efforts done by anyone else, remains easy to use and understand. Functions in the Mazda Connect system are not more than two menus deep, and even so, pictograms and explanations in Plain English make them immediately understandable.

The low driving position and thick C-pillars may conjure up images of terrible blind spots, and to some degree, there are (especially from the back), but the wide mirrors and frameless rear-view mirror do minimize them. Even so, front and rear sensors, and a high-resolution 360-degree camera help in tackling tight situations. That said, the sensors are sensitive, and this may cause some irritation as motorcycles filter through stop-and-go traffic. For sanity’s sake, it’s best to turn off the sensors except when parking. Also, in this Speed guise, it’s worth noting that the front is noticeably lower than the previous model. With that, expect it to scrape through steep driveways.

The steering wheel offers a wide range of adjustment and together with the highly supportive seats, is posture-perfect, making driving an entirely fatigue-free affair. Even more surprising, the same supportive seat design is present for those at the back as well. However, those seated in the back will have to be content being squished by the lack of knee- and headroom; and that’s after getting their heads banged up upon entry.

In creating the new Mazda3, engineers say they didn’t seek out the competition. Instead, they sought the help of psychologists and ergonomists to find out how the human body behaves, and how things like movement elicits feelings of joy and happiness. It’s come to a point that Mazda’s gotten it down to a mathematical formula; a formula so accurate that when they did decide to drive the competition, they managed to come out on top.

Admittedly, a round-the-block test drive isn’t enough to convince anyone about all this human-centric design. As a matter of fact, the ride can come across as firm. It’s only when its driven or ridden more when it starts to feel different.

Traditionally, engineers reduce the suspension rebound to improve the ride, in the Mazda3, it’s all about controlling it. By unifying the development of the body, suspension, tires, and even seats, it reduces secondary shake and vibration to near zero. Anyone would be skeptical at first, but try this simple exercise: read the contents of the heads-up display, or as a passenger, a text message or Facebook status update—it’s possible without getting dizzy. Why? Because the head is kept steady. It’s similar to walking—the body never gets dizzy when walking because its balances itself. It’s this sense of innate balance that the Mazda3 taps into.

This same sense of balance happens when you drive it spiritedly. Again, it’s not about power or even overcoming a power deficit against its competition; rather, it’s about predictability. In a straight line, a handful of compact cars will smoke it; they might even be faster around a race track. But every inch of the way, it’ll be a struggle with an unplanned mid-corner correction or whatever else. Not so much with the Mazda3.

It’s all about natural progression. For one, the steering is precise and linear. Then, the chassis is also willing to rotate, with no traces of float and no excess lateral motions from the rear. It even has torque vectoring control, but unlike in other applications, it’s not here to maximize traction; rather, it’s there to smooth out cornering, specifically the transitions between roll and pitch. As a result, it’s easy to know the Mazda3’s limit, and even when it’s crossed, it’s always easy to catch. A caveat is that the chassis engineers have done it so well that they’ve eliminated the forward pitching during heavy braking resulting in a rather wooden brake feel.

The same story goes with the Mazda3’s engine. On paper, the Skyactiv-G engine doesn’t pull off mega numbers: 154 horsepower for the 2.0-liter. In reality though, it’s a well-matched engine to the chassis. Plus, it’s pleasant and refined. It helps achieve impressive NVH levels even at speeds in excess of 100 km/h. Dig deeper, and it’ll be more than happy to sing at wide-open throttle its entire life. The 6-speed automatic is a willing accomplice, happily revving the snot out of the engine, while staying smooth and intuitive. It always seems to know that a spirited drive is coming up, and will downshift through multiple gears to keep the pace up. Paddle shifters and a Sport mode are standard, but they’re almost always unused. Interestingly, when it comes to fuel economy, the Mazda3 achieves 10 km/L—a great number, but is actually lower than the previous Mazda3. The reason? The new one makes do without the i-ELOOP kinetic energy regeneration system.

Others may see the all-new Mazda3 as overcomplicated and overengineered—filled with engineering details which will escape the usual buyer. However, by realizing that Mazda sees the compact car buyer as being personal and emotional—they’ve designed and engineered the Mazda3 to fulfill that exact role. Design fads fade and technology can always be replaced, but by tugging at the heart, Mazda hopes for a long-lasting emotional bond. It’s a different strategy in the compact car segment for sure, but because of that, it also makes the Mazda3 all the more unique.