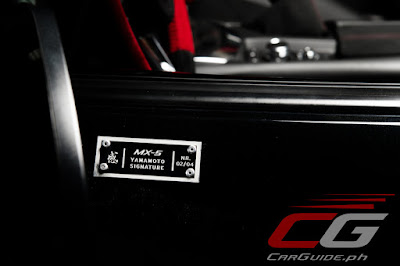 Glancing through Nobuhiro Yamamoto’s CV is enough to convince you that he’s cut his teeth doing go-fast Mazdas. After joining the Japanese carmaker in 1973, he worked on rotary engines culminating in their 24 Hours of Le Mans winning effort with the 787B in 1991. It was only fitting that after that, he became the program manager for the MX-5 including the current-generation ND.

Now a MX-5 Global Ambassador, Yamamoto-san has weaved his magic n what he considers the purest roadster experience. Officially called the MX-5 Yamamoto Signature edition, they’re only available in one country: Italy.

Because Yamamoto-san has always believed that the MX-5 was all about being lightweight and nimble, he shunned the 2.0-liter engine in favor of a high-revving 1.5-liter. The 131 horsepower, 152 Nm of torque outputs may seem pedestrian but in car that weighs just 975 kilograms? It’s just a second off the 0-100 km/h times of its made-for-America 181-horsepower sibling.

The MX-5 Yamamoto Signature is only available in Jet Black (the best color of the MX-5 ND according to Yamamoto-san) with the Mazdaspeed aero kit painted in redd. It also sports unique badging such as the Japanese word, Kan (feeling/sensation) along with the serial number riveted on the bodywork and on the rearview mirror. Oh, and get this: this special edition resists the temptation of offering larger rims, too. Here, they’re 16-inch Enkei RPF1s with a red lip (they’re about 400 grams lighter than stock) with 205/50 Toyo R888R semi-slick tires.

With the powertrain already to Yamamoto’s liking, the changes here are limited to a brake upgrade (it gets the larger discs from the 2.0-liter models) with Brembo 4-piston front and Nissin rear brake calipers, stainless steel braided brake hoses, and specially tuned Ohlins suspension.

Inside, the predominately black theme with red highlights continues. Gray Alcantara and/or red suede is used to re-trim the steering wheel, armrests, gear shift, handbrake lever, and center console. Handstitched in Italy, the steering wheel’s execution is close to the RX-8—another vehicle that Yamamoto-san was involved with. Even the dashboard panel didn’t escape scrutiny and is now trimmed in Alcantara and features an embroidered signature of Yamamoto-san.