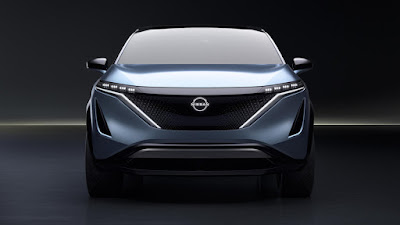 Nissan unveils what they call a concept that epitomizes “its brand philosophy for the next evolutionary phase of the automobile.” If that’s really the case, then prepare to be bored with the Ariya.

Suffice to say, as far as concept cars go, it’s not wild enough. Yet, because Nissan counters that by saying “the bold styling, and unconventional interior and exterior elements” could make it to future production cars, perhaps that makes it a bit more palatable.

Designed with “Timeless Japanese Futurism” in mind, it’s got a “shield” for a grille, large fenders, a steeply raked C-pillar, and a one-piece “light blade” at the back—you know, stuff you’ve already seen in past concept cars before.

Nissan’s PR language though has let their imagination run wild by saying the embedded glass flakes in the paint “produce billions of light refractions, reminiscent of a comet crossing the night sky.” Uh, sure. Ditto the new signature color of Nissan’s EV: copper which is supposed to signify, “the color of the sun as a it breaks through the night to start a new day.” Hyperboles all around indeed. Perhaps they should be left in charge with Nissan design, huh?

Inside, the ultra-minimalist dashboard features a flat floor and an instrument panel that’s uncluttered by buttons and switches. Haptic touch controls will be used as the only physical controls are the start button and a knob to operate the 12.3-inch display monitor (sounds familiar?), and the climate controls.

Again, while the Ariya Concept doesn’t exactly stir the soul as a concept car, Nissan hasn’t been coy in saying that they want their next production EV to be a crossover. If they do end up producing something close to the Ariya (it’s sized like the Nissan X-TRAIL if you wanted to know), then it’s possible that they’ll have something quite nice on their hands. As a concept though, it’s actually quite easily to miss at the halls of Tokyo Big Sight.
at 6:27 AM