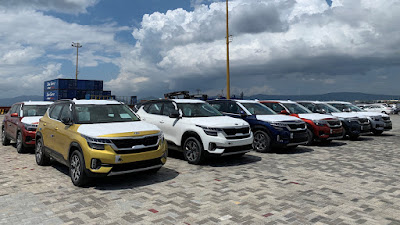 Thinking of getting a Kia Seltos? Well, there’s one less thing you need to worry about: waiting time. Bullish on the prospects of their new global sub-compact crossover, Kia Philippines says that more than a hundred Seltos units have landed, cleared port, and should be making their way to dealers nationwide in time for its official November debut.

The photos sent by Kia Philippines is our first look at how the Philippine models are speced. They look to be the top-of-the-line P 1.498 million SX variant, and with that looks to come with full LED headlights and LED daytime running lights that extend to the grille (the Seltos’s defining design trademark). It looks also to sport the GT-Line’s 18-inch wheels (minus the red center cap), and an available two-tone roof.

Kia Philippines also tried hiding the lower-end LX and EX models by putting them in the background, but try as they may, look closely and you’ll be able to make them out. The red unit in the photos is most likely the base LX and with that it loses the fog lights and side mirror-mounted turn signal lights. They also appear to have dropped the roof rails on this variant, too. Surprisingly though, the wheels look to be of the same design and size (18-inch) as the SX variant.

Another batch of Seltos SUVs is making its way from Korea and should arrive in the Philippines also before its November launch.
at 11:59 AM