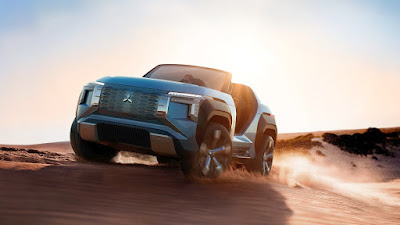 Taking on a buggy-like appearance, the Mi-Tech adopts the signature Dynamic Shield front design concept, now finished in satin silver (with copper as a secondary color) to accentuate its bold nature. It also has T-shaped headlights which may make it to future Mitsubishi models.

On the sides, the highly raised overfenders and large diameter tires project stability to take on any terrain while at the back, the rear-end looks to be shaped from a single piece of metal ingot while also echoing the same T-shaped light pattern used on the front.

Inside, it’s all about minimalism and simplicity. Mitsubishi has also opted to project all relevant driving information onto the windshield.

Perhaps the most bonkers thing about the Mi-Tech Concept is that it’s a plug-in hybrid vehicle that uses a gas turbine engine as a power generator. Mitsubishi says they’ve chosen to use a gas turbine engine for its high-power output relative to size and the fact that it can be run on a variety of fuels such as diesel, kerosene, and alcohol.

Moreover, the Super All Wheel Control (S-AWC) now uses a quad-motor system with the front and rear acting as yaw control units. Mitsubishi has also made the brake caliper engagement electric allowing for faster response while also giving a high level of accuracy and control. While this will give better confidence in all conditions, Mitsubishi says it should provide new driving experiences by allowing the left and right tires to counter rotate creating 180-degree spins.

Aside from augmented reality technology, the Mitsubishi Mi-Tech Concept comes with the next-generation driver assistance technology which extends driver support not only on-road driving, but on off-road driving as well.