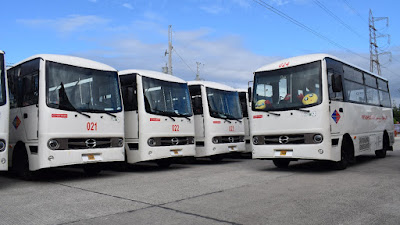 Hino Motors Philippines (HMP) closes the year with more than 300 units of modernized PUVs turned over to different transport cooperatives nationwide. As 2020 approaches, the company remains steadfast in its commitment to support the government’s flagship program for the transportation industry.

A pioneer supporter of the PUV Modernization Program (PUVMP) in line with the government’s vision of a restructured, modern, well-managed and environment-friendly transportation system for the Filipinos, HMP has backup up the program since it was announced by the Department of Transportation (DOTr) in 2017 through planning and execution. Prior to the launch of the PUVMP, the DOTr hosted a one-day expo featuring modern PUV prototypes. There, Hino showcased its Class II and Class III AC and non-AC modernized jeepney prototypes during the said expo.

To date, Hino has established partnerships with 16 local transport cooperatives. The company has turned over a total of 364 modern PUV units nationwide. Most of these modern PUVs are already operating in Metro Manila, and many have reached other parts of Luzon, Visayas, and Mindanao.

Hino is set to turn over more units this month to reach its goal of 500 modernized PUVs turned over to transport cooperatives by the end of the year.

As the only local one-stop shop for trucks and buses in the Philippines, Hino is proud to offer its end-to end services— from design and development to manufacturing and spare parts supply— to the government and its transport cooperative partners. Hino’s modernized PUVs have been awarded with a Certificate of Compliance from the DOTr for having passed the Philippine National Standards (PNS)’s dimension requirements and other standards set by the national government.

Hino PUV units come in two variants--Class II and Class III in AC and non-AC versions. The Hino Class II PUV is designed like the standard jeepney with side-facing passenger seats. The jeepney can accommodate standing passengers to maximize capacity. The Class III model is an air-conditioned mini bus-type with front-facing passenger seats with seatbelts. Both PUV types can accommodate 23 to 30 passengers. Powered by Euro 4 engines, these modern PUVs are set to deliver safe, efficient and sustainable transportation for Filipinos.

As Hino enters 2020, the company hopes to strengthen the presence of its PUVs in Metro Manila and other parts of the country.
at 2:06 PM