Ford Philippines Could Bring In the Ranger Wildtrak X 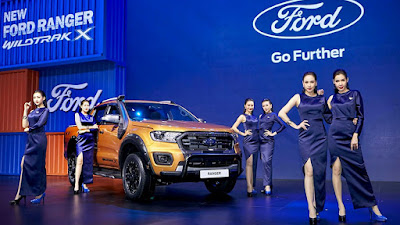 With a P 303,000 price gap between the Ranger Wildtrak 4x4 and the Ranger Raptor, Ford may consider adding the newly-launched Wildtrak X to fill in the price gap.

Already available in Thailand and in Australia, it’s an accessories package built to improve the off-roading capabilities of the Ranger Wildtrak even more. The Wildtrak X adds a front nudge bar, snorkel, and fender extensions decorated by Ford logo pins. The wheels are also traded for more rugged-looking 18-inch ones.

Under all that though, the Ranger Wildtrak remains the same and for that, it gets the same 2.0-liter Bi-Turbo 4-cylinder engine making 210 horsepower and 500 Nm of torque, the same 10-speed automatic, and of course, the part-time four-wheel drive system.

Here’s the interesting bit, the package costs roughly P 101,700 Thai Baht or P 171,087. If Ford Philippines does decide to bring in the Wildtrak X, it’ll be sold for around P 1.8-million. Expensive, maybe but it still does provide a cushion to the Ranger Raptor’s P 1.998-million price tag. Oh, and it’s also worth noting that the Wildtrak X, like the Wildtrak on which it’s based on, comes with a variety of driver assist features not found in the Ranger Raptor such as adaptive cruise control, active park assist, and automatic emergency braking with pedestrian detection.
at 6:00 AM