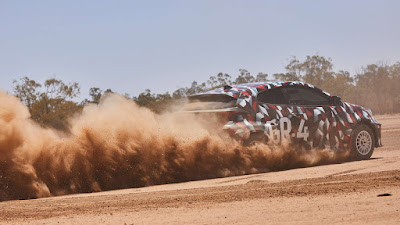 Toyota is teasing its next global GR model after the GR Supra, and thankfully, the world won’t have to wait long for it. Coming this January, the world will see the GR Yaris which will make its debut at the 2020 Tokyo Auto Salon in January.

Not much has been revealed about the GR Yaris, but Toyota did officially say that “it incorporates all the technologies, knowledge, and experience learned from the World Rally Championship (WRC).” That’s certainly a good start given Toyota did bag the Driver’s and Manufacturer’s Title in the 2019 WRC season. Even more impressive is that Akio Toyoda himself (under his TGR Master Driver code name, “Morizo”) has personally tested the car to its limits.

The rumor mill has been churning tons of stories about this high-performance hot-hatch. The most interesting among them is that its advanced all-wheel drive is done in collaboration with Subaru. There are even rumors that Subaru themselves will benefit from a re-badged version that will slot below the WRX.

Regardless, because it carries the “GR” badge instead of the “GRMN,” this won’t be a limited-production model. In fact, if Toyota plans to race a version of it in the WRC, they’ll probably have to make 25,000 of them to reach homologation requirements.

More will be revealed in January, but for now stay tuned.
at 4:13 PM