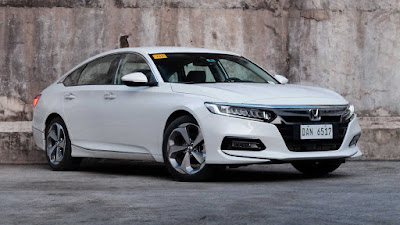 By most accounts, the Accord is starting its slow descent towards automotive purgatory. Flanked by competition such as the Camry and the Mazda6, Honda’s once celebrated executive sedan is now outperformed, outvalued, and as a result, outsold by the competition (and this isn’t taking into consideration the proliferation of mid-sized SUVs, too). However, instead of taking its fate lying down (hello, Altima and Legacy), Honda has come up with this: the tenth-generation Accord. The question now is: is it a siren song that lures buyers back, or is it a memorial for a dead car rolling?

On the surface, things don’t bode well for the Accord. With just a single trim available, it seems Honda themselves have dismissed it to a niche existence (remember the Camry still has two, and the Mazda6, three). Officially called the EL Turbo, this lone variant is priced at P 2.288-million—around P 200,000 and P 38,000 more than the top-line Camry and Mazda6, respectively. And yet, despite its high price tag, it doesn’t pack the single, most sought-after feature: the de-tuned Civic Type R engine; instead, it gets a re-tuned version of the Civic RS’s.

Surprisingly, all those worries go out the minute you start driving. Its lack of a melodious note aside, this 1.5-liter turbocharged motor is silky smooth. It’s quiet and unobtrusive in all but hard driving situations, and even then, it emits an angry purr when caned. Its 190-horsepower output is more than enough to satisfy enthusiasts, a subjective feeling backed up by the fact that the Accord’s power-to-weight ratio is close to the Civic RS and even beats the Mazda6 Diesel. Despite its reliance on boost, there’s no noticeable lag as power comes in strong, holds on through the mid-range, and only eases up at the top-end. What’s lacking here is torque. Since its peak figure comes rushing in early at 1,600 rpm, you get that first hit of urgency, followed by not much; there’s no additional surge that follows.

Some of the blame surely goes to the Accord’s solid, but unspectacular 260 Nm output, but largely, it’s down to Honda’s decision to put in a CVT instead of a traditional torque converter gearbox. While it’s perfect for a daily driver (great for trotting in the city or cruising on the highway), the rubber band effect is ever present whenever you want it to do something more enthusiastic. Toggling the ECON mode on or off seems to have little effect, though switching to Sport does hold the revs much longer for a more entertaining drive. That said, the small displacement turbo and CVT gearbox does improve the fuel economy here registering 7.2 km/L in heavy and 9.5 km/L in light traffic.

The entire drivetrain is fitted to a well-rounded chassis. Honda is particularly proud of this accomplishment due to its construction. It’s a mix of aluminum, 57 percent high-strength steel, and 29 percent ultra-high-strength steel, resulting in a curb weight that’s 66 kilograms lighter than the previous Accord 2.4 S. Its on-road behavior is tuned more towards a comfort-oriented drive, and for that, it absorbs rough patches of city road with poise. Furthermore, it does a great job at suppressing road noises, too. Yet, push it more and it obliges. Gifted with a natural and well-weighted steering coupled with a taut body, it controls body roll quite well. It’s quite responsive, and even fun. A bit of a caveat is that it does little to mask its size. It exudes a big-car feel, perhaps even more so because of the wide hood when viewed from the driver’s seat. Psychologically, this robs some feeling of agility, and admittedly, takes getting used to.

Of course, the Accord was never meant to be as agile as a Civic, so its big-car feel does mean one important thing to would-be executive sedan owners: big-car space. The new fastback styling means extra care must be exercised when getting in and out of the rear seats, but aside from that there’s nothing to complain about—there’s far more legroom here than what the average Filipino adult would ever need. The seating position is great and lets the driver get as low or as high as desired. Still, it would be nice if the front seats were a bit more sculpted. As they are, the bolsters are decent, but the middle portion is a little flat.

More than offering sheer space, Honda’s also done a fine job of improving yet another Accord weak point: interior design and materials. The instrument panel and infotainment screen are both bright and sharp, with the latter the best in any modern Honda with its snappy responses, and big, easy-to-tap icons. It’s a far cry from the ugly, low-res system installed in the Civic, and thankfully, supported by rows of physical buttons and switches. Though Honda’s not really known for interior flair, here it gets some in the temperature control knobs where the backlighting changes to red or blue if you increase or decrease the temperature. All of the switches are in their logical places, though its odd why the gear lever is extra tall.

While the Accord feels big inside, thankfully it doesn’t look it from the outside. With a fastback-like roofline, low and wide stance, it has an undeniably sporty vibe. The tight creases and lack of extraneous vents and grilles make it look lean and athletic. Unfortunately, there’s one bothersome detail here, and that’s the gawky taillights. Perhaps Honda should consider cleaning that up come its refresh.

But an even more pressing concern than the taillights is the price. As previously mentioned, it’s the most expensive among the three best-selling executive sedans. Yet, it doesn’t have a sunroof, memory seats, or even a fancy audio system. What it does have is Honda SENSING—a pack of driving aids that basically prevents a crash. Some, including Honda themselves may see this as a worthy tit for tat exchange, but at this price range? It’s everything and the kitchen sink, or bust.

All told, not giving its all is the Accord’s only sin. While it looks and drives well, is noticeably more refined, classier, and actually comes packing driver tech, you know Honda could have done more to make it stand out. Adding in Honda SENSING, while impressive, isn’t enough to seal the deal in this already sparsely populated segment. Just as how they’ve weaved their magic in the compact car class with the Civic and the compact SUV class with the CR-V, Honda could have opted added more features, plopped in a bigger motor (or hybrid), or sell it for less. Instead, they’ve played it safe, and for that, they might have sealed its fate.

Email ThisBlogThis!Share to TwitterShare to FacebookShare to Pinterest
Filed Under: Driver's Seat, Executive Car, Honda Accord