Yes, You'll be Spotting a Subaru Forester Covered in Zebra Pattern This December 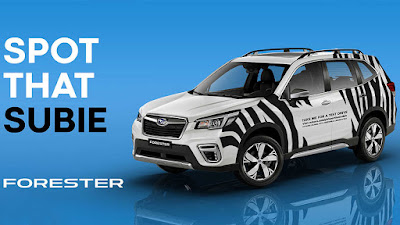 Okay, remember when we mentioned that the Forester sounds like a zebra being castrated when pushed hard? Well, okay, we swear we had nothing to do with this promo, but for the sake of our readers, here’s why you’ll spot a Forester covered in a zebra wrap this December.

It’s all part of Motor Image Pilipinas’s “Spot That Subie” promo. If you happen to snap this Forester rocking the zebra livery (please don’t do it if you’re driving; remember, that’s not allowed), you could win some premium Subaru goodies.

All you need to do is to take a photo when you see it cruising the Metro. After that, visit one of Motor Image Manila branches: C5 – Pasig; Greenhills, San Juan; BGC; or Manila Bay and show the photo to any of the Sales Consultants on duty. Then, take a spin in the Forester (don’t worry, the zebra stripes aren’t standard), and you’ll get your premium Subaru merchandise at the end.

If you’re more into surfing the worldwide web (or social media) than driving through Manila traffic, don’t worry, you can win merch too. This time, just find the zebra-wrapped Forester on Facebook, pause the GIF when you see it, and take a screen cap. Then, head over to any of the 4 Motor Image Manila branches, show the photo to the Sales Consultant on duty, and take a test drive. After all that, the premium Subaru merchandise is yours to keep.

You do have to hurry though. Only 10 premium Subaru merchandise is up for grabs at each branch (40 in total). The promo officially ends on December 31, 2019 so better have those phone cameras on the ready.
at 7:00 AM