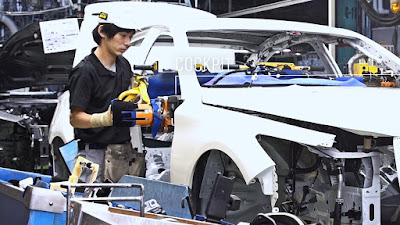 As carmakers come to grips with a fast-changing landscape, Nissan is investing big to upgrade its assembly facilities around the world to make them more flexible, efficient, and sustainable. And the first to benefit is Nissan’s Tochigi Plant in Japan which received a 33 billion-yen (~ P 15.72 billion) upgrade.

With Nissan’s next-generation of cars being electrified, intelligent, and connected, it adds complexity to design and construction, requiring advancements in production engineering. One such advancement is the “universal powertrain mounting system,” which uses an automated pallet to mount the entire powertrain at once (as opposed to installing components in sequence). This automated pallet can mount 27 combinations encompassing traditional internal combustion, e-Power, and pure electric drivetrains.

Moreover, Nissan is bringing in more specialized robots to its manufacturing, replacing tasks which were once done manually by trained craftspeople. This includes the application of a paste-like material to seal the seams around the vehicle body to prevent water intrusion. Increased robotics also makes factories an easier place to work. For instance, the headliner, which was installed manually before can now be installed automatically by a specialized robot.

Finally, Nissan has implemented changes to its painting process. Previously, car bodies must be painted at high temperatures, because the viscosity of paint is hard to control at lower temperatures. By contrast, bumpers are made of plastic, so they need to be painted at low temperatures. This requires two separate painting processes for one vehicle. Now, Nissan has developed a water-based paint that maintains the right viscosity at low temperatures, so that bodies and bumpers can be painted together. This will cut carbon dioxide emissions from the process by 25 percent. Nissan will also use a water-free painting booth that makes it possible to collect all waste paint and reuse it in other production processes.

Since 1933, Nissan has honed its ability to mass-produce vehicles to the highest possible standards. This latest investment represents a necessary rethinking of conventional car making and tackles the structural and technical challenges of producing vehicles that will lead the industry in a new era of electrification and intelligence.
at 2:22 PM