The 2020 Mercedes-Benz GLC Isn't Intimidating to Drive At All 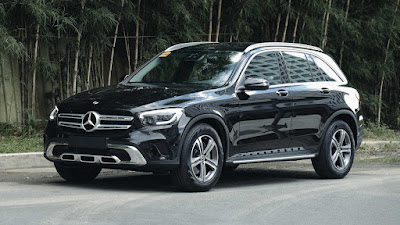 P 4.290-million—that’s more money than I’ll make in a lifetime, barring winning the lottery, of course. It’s also the starting price of the 2020 Mercedes-Benz GLC which makes it, to a huge part of the population, ridiculously expensive. Since it’s basically my future retirement fund on wheels, understandably, I had some hesitation of driving it during peak traffic. But you know what I’ve learned? Man, it’s not as intimidating as you think.

A bit of a caveat: this isn’t the most expensive nor the most powerful car I’ve driven; but it’s the first time I’ve been thrust into the seat of one without much of an introduction to its features and specs. With no one to explain what this button or that switch does, I had just about 10 seconds to figure everything out and get comfy before driving off on EDSA. During rush hour.

Outside, the 2020 GLC is almost unchanged from previous year models except for the new head- and taillights (now all in LEDs), and a new design for its shoes. Still, I gotta love how Mercedes designers managed to keep the GLC clean and fresh—a departure from the gaudy trend of oversized grilles and busy contours that seem to infest other German brands.

Most of the rework to the GLC though is found in the cabin, and even then, the changes are quite subtle. The gauges are the most noticeable one—a swap of the old analog/digital combination to an all-digital setup. The 12.3-inch display is crisp clear, perfect for the sort of high-tech luxury that Mercedes-Benz is now trying to achieve. Then, you have the steering wheel—a compact three spoker with far less buttons but with more commands (I’ll get to that later) than in previous Benzes. And finally, there’s the new infotainment system—MBUX, a voice activated system that uses contextualized voice commands that adapts to its user. Sounding great so far? Good, because that’s as far as this tech stuff goes.

With just a 15-kilometer drive ahead of me, getting used to the GLC’s rather peculiar man-machine interface is unnerving. Like I said, I had 10 seconds to figure everything out and get going—that’s not enough time to even scratch the surface of what MBUX can do. Suffice to say, I didn’t “Hey Mercedes” it given I might become the object of ridicule among my carmates, and to the Go Pro camera that’s constantly recording our every move. Instead, I stuck to the traditional controls, preferring to customize the gauges and the infotainment screen via the two touch-sensitive squares on the steering wheel. Former BlackBerry users will find it quite easy to adapt to this control structure—a far better execution than the one found in the new-generation Hondas for instance. It was smooth until my carmates and I started talking and comparing the GLC to its two chief rivals: the Audi Q5 and BMW X3; at which time, the MBUX came to life and asked, “What can I help you with?” That’s certainly creepy.

And speaking about how the GLC compares to its rivals, it’s a far easier drive compared to the BMW X3 (I’ve yet to drive the new Audi Q5). Though similar in proportion, the Mercedes does have the advantage of better sightlines. With this, it makes it far easier to gauge it in bumper-to-bumper traffic, especially dead ahead and at the corners. And together with the surprisingly light, but accurate steering, it’s a cinch to park. Dare I say it, but the GLC’s on-road feel is closer to that of a premium Japanese SUV—a turn off for Benz loyalists for sure, but for the majority, this familiarity will mean far less time adjusting to its quirks. It also rides extremely well, though I must admit that a better conclusion is reached when I’ll get to drive it past 60 km/h or have it go through rougher patches of Metro road (hello, C5).

With a GLC 200 badge at the back, this Benz is powered by a 2.0-liter motor making 197 horsepower and 320 Nm of torque. These figures are up from the previous year model’s, but again, without the ability to stretch its legs, I’d have to say that the power is simply adequate.

A full multi-day drive is necessary to past judgement on the 2020 Mercedes-Benz GLC. However, as far as first impressions are concerned, it’s managed to prove itself to be an easy drive. Yes, the infotainment system is needlessly complicated, but at least the rest of the car isn’t. With motorcycles zipping in and around traffic, you’ll certainly want a car that’s not intimidating to drive. And while the large three-pointed star is already enough to act as a barrier or sorts against under bones and what have you, the GLC itself makes the thought of driving 4.29-million pesos on wheels far less daunting.