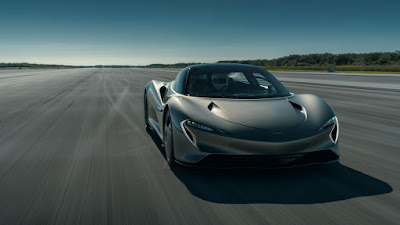 Built for outright speed, McLaren had to make sure its new Speedtail is up to snuff. So, they brought one to the Kennedy Space Center in Florida where it reached its maximum speed of 403 km/h not just once, not twice, but more than 30 times.

The McLaren Speedtail prototype “XP2” reached its terminal velocity on a runway typically used by the space shuttle. It’s the last part of its high-speed testing program which brought the 5.2-meter long, carbon fiber-bodied hypercar through multiple test facilities worldwide.

More than just its aerodynamically drag-efficient body, the Speedtail packs more power and torque of any McLaren road car with 1,070-horsepower and 1,150 Nm of torque.

The Speedtail combines a modified version of the McLaren 720S’s twin-turbo 4.0-liter V8 with a McLaren-developed battery pack that boasts the best power-to-weight ratio of any automotive high-voltage system. The batteries constantly self-charge when the Speedtail is driven (there is no ‘plug-in’ element); however, a wireless charging pad that trickle-charges and maintains the battery’s status when the vehicle is not in use is also included as standard.

The Speedtail is limited to just 106 units globally and all will be hand assembled in the U.K. with customer deliveries starting in February of next year.
at 10:26 AM