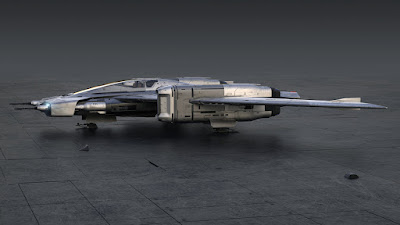 In a unique collaboration, designers from Porsche and Lucasfilm have come up with a fantasy starship that brings together the design DNA of both brands. The result is the Tri-Wing S-91x Pegasus Starfighter.

Developed over a period of two months, the project team worked together at their respective design studios in Weissach, Germany and San Francisco to create initial ideas and drafts before finally coming up with a concrete concept.

And while it will be presented as a detailed model measuring 1.5 meters (5 feet) in length at the premiere of Star Wars: The Rise of Skywalker, it won’t be in the film itself.

Regardless, Porsche says traditional cues in the Tri-Wing S-91x Pegasus Starfighter were clearly inspired by its sportscars including the compact layout and cabin shape.

Moving to the details, there are a number of features which are straight from the Porsche design stylebook. The front is reminiscent of the so-called ‘air curtains’ (air inlets) that go together with the headlights to create a single formal entity in the Taycan. In addition to the four-point daytime running light typical of Porsche, the so-called ‘blasters’ – long gun barrels at the front – are located at the tip. The rear grid with the louvres and integrated third brake light was inspired by the current 911 generation, and the rear section of the starship bears the brand’s hallmark light bar.

Porsche design criteria have been applied to the interior, too: the instruments in the cockpit are clearly aligned with the driver (pilot)’s axis, while the low seating position is reminiscent of the sporty ergonomics in the Porsche 918 Spyder.

Porsche says legal requirements can impose restrictions on creativity for its design people, and projects such as this collaboration with Lucasfilm offer them a new dimension of freedom.
at 2:40 PM

Email ThisBlogThis!Share to TwitterShare to FacebookShare to Pinterest
Filed Under: News, Porsche Corporate