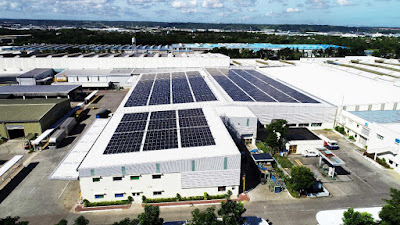 With its undisputed position as the country’s number one carmaker, Toyota Motor Philippines (TMP) is also taking big steps towards nation building. While majority of the news is concentrated on sales and sales plans, the auto giant is also very proud of its role in various environmental and industrial initiatives.

Toyota Motor Philippines has invested in a 60 million-peso 1-Megawatt Solar Array at its Santa Rosa, Laguna plant. Done in cooperation with the Japanese government and Meralco’s renewable energy subsidiary, Spectrum, this solar array is able to support 12 percent of TMP’s manufacturing energy requirements. Aside from saving the company approximately 9-million pesos annually, more importantly, it reduces their carbon emissions by 4 percent.

Aside from providing thousands of jobs throughout the entire manufacturing supply chain and distribution network, Toyota also has the TMP School of Technology in Santa Rosa, Laguna. As of 2019, it has produced a total of 1,178 graduates, highly-skilled technicians equipped for various fields of automotive servicing and repair most of whom are now employed at various Toyota dealerships in the country and abroad.

Toyota also remains committed to the government’s CAR Program and has already invested 5.38-billion, as of 2019, for the localization of parts. To date, they have achieved 58 percent localization of the total body shell weight of the Vios—far exceeding the 50 percent requirement set for the CARS Program. With that, they are confident of reaching the 200,000-unit target for the Vios within 6 years.

Finally, for its vehicles imported from Japan, Thailand, and Indonesia, TMP will setup a 4.5 billion-peso logistics hub in Luzon. This infrastructure, slated to be operational by the second semester of next year, will increase the efficiency of Toyota’s post-production vehicle logistics operations reducing the wait time for customers.

These investments, together with the previously mentioned mobile app, introduction of a leasing program, and their entry into the PUV Modernization program, Toyota Motor Philippines believes they have what it takes to take on the fast-changing automotive industry. Things are certainly looking bright in 2020 for the country’s number one carmaker.
at 7:37 AM