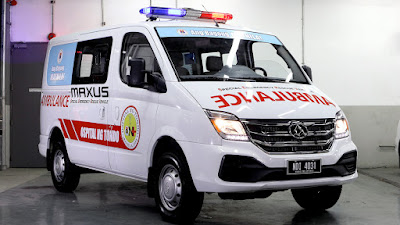 Maxus Philippines donated a Maxus V80 Flex ambulance to the Ospital ng Tondo in Manila last December 9. This is in line with its corporate social responsibility efforts; which focuses on providing convenient and efficient vehicles to institutions and individuals.

The donation of the Maxus V80 Flex ambulance represents Maxus Philippines’ concrete support for the local government of Manila’s efforts to fulfill the Mayor’s promise of “real change” in his vision of “Ang Bagong Maynila (A New Manila)”. This vision includes improving healthcare services for the citizens of the country’s capital city.

The ambulance is a 3-seater Maxus V80 Flex van customized by Winterpine Marketing Corporation, featuring LED toplight with siren and public address (PA) system, with official decals and vinyl sticker ambulance markings, and fitted with stainless bumper and stainless ramp approach. Inside, a two-layer medical floor-mounted cabinet, as well as a fully collapsible stretcher with locking mechanism have been supplied.

Reginald See, General Manager of Maxus Philippines, says the periodic maintenance service (PMS) interval schedule for the V80 Flex ambulance, like in all other Maxus vehicles, are the first 5,000 kilometers and every succeeding 10,000 kilometers, or once a year, whichever comes first. For this emergency medical services transport that is on-call 24/7, this would be more convenient, cost-efficient, and more critically advantageous compared to the industry-standard 5,000-km PMS interval.
at 11:37 AM