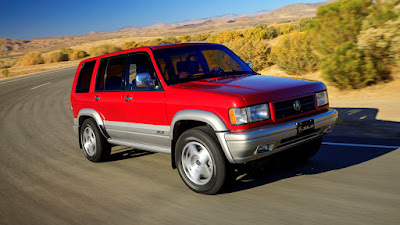 Before the big crossover craze, Honda and its luxury division, Acura, relied on a rather left-field choice to provide them with an SUV for the US market: Isuzu. The result is the Acura SLX, which is in turn, a more upscale Honda Passport, which is basically a re-badged Isuzu Trooper. You still follow?

Forgotten and lost in time, Honda dug up a 1996 Acura SLX and shoved in a 2.0-liter VTEC Turbo engine. The result? A ladder-frame SUV with 350 horsepower and 461 Nm. Coupled with what’s essentially a Civic Type R engine, Honda also shoehorned a multi-link independent rear suspension, the Super Handling All-Wheel Drive system (sourced from an Acura RDX), and a 10-speed automatic.

The process started with a donor Acura SLX—in this case, unremarkable VIN 0052. After that, the body and frame were separated and restored. Once that was done, Honda/Acura engineers worked to mate it to the 2.0-liter VTEC Turbo motor. This resto-mod SLX also gained new front and rear subframes, and larger ventilated brakes as well.

Remarkably, Honda/Acura opted to keep this special one-off SLX a sleeper. Aside from its Performance Red Pearl/Champagne Silver two-tone exterior paint, the only indication of its performance is the Fifteen52 Tarmac wheels measuring 17-inches (that’s just one inch up from the stock SLX’s 16-inchers). Inside, it’s a proper 1990s throwback except for its dark gray Milano leather, modernized wood trim, and a push-button shifter that integrates the new electronic parking brake.

The SLX used for the build, a 1997 model originally painted Fir Green Metallic, was previously owned by Acura enthusiast and collector Tyson Hugie. A lifelong fan of the Acura brand who owns a 1994 Legend Coupe, 1994 Legend Sedan, 1992 Integra GS-R, and a 1992 Acura NSX.
at 4:12 PM