Someone Commissioned This Pain-in-the-Ass Rolls-Royce Wraith 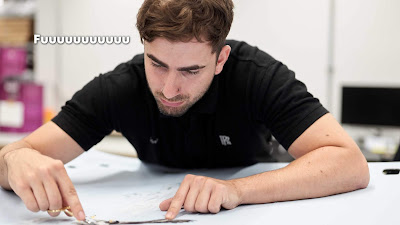 Ask and Rolls-Royce’s craftsmen will deliver. But imagine what a pain-in-the-ass this request was for the folks over at the Home of Rolls-Royce in Goodwood. Why? Read on.

See, a client wanted a Peregrine Falcon—the world’s fastest bird—embroidered on the car’s leather headliner. And because he’s willing to pay top money for it, Rolls-Royce Bespoke Collective went to work.

Consisting of nearly 250,000 stitches, the dramatic embroidery took a team of designers, craftspeople, and engineers over one month to develop.

The craftspeople started observing the bird to get the final stance (a predatory one, mind you) right. They also had to study the musculature, and even the shade of the feathers. After that, they created multiple iterations to ensure that the embroidery won’t cause waves in the leather—which happens when it’s subjected to stress and tension.

Aside from the Peregrine Falcon itself, this specially commissioned Rolls-Royce Wraith also incorporates other avian detailing found in the exterior coach line, between the rear seats, and painted into the piano black fascia.

The end result is impressive whichever way you look at it.
at 10:13 AM

Email ThisBlogThis!Share to TwitterShare to FacebookShare to Pinterest
Filed Under: News, Rolls-Royce Wraith