The Toyota GR Supra is the Best Sportscar...in Germany 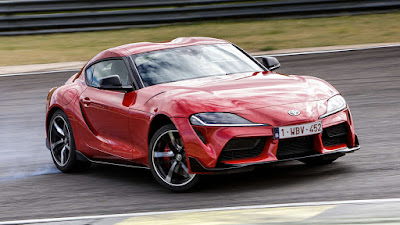 Well, well, well…how’s this for a surprise. Despite being practically twins underneath, the Toyota GR Supra aka A90 aka the “Zupra” managed to beat its BMW twin to become the best sportscar. The most interesting twist? This award was given by Germans.

In a unique twist to the usual car awards, the Golden Steering Wheel uses a combination of both popularity vote and expert opinion to determine the winners. First, readers selected their favorites from more than 50 eligible new cars, with the top three in each category then put to the test by a team of expert journalists, racing drivers, and celebrities at the Lausitzring circuit. Each car was assessed against set performance criteria and accorded points scores to determine the overall winners.

This is the second time the GR Supra won the Golden Steering Wheel award with the first being in 1982.

Aside from the GR Supra, the only other Japanese model on the list is the Mazda CX-30 which won for best small SUV. Other winners are the Audi A1 Sportback (small car), BMW 1 Series (compact), Jaguar I-PACE (mid-sized SUV), and the Audi e-tron (large SUV).
at 9:27 AM